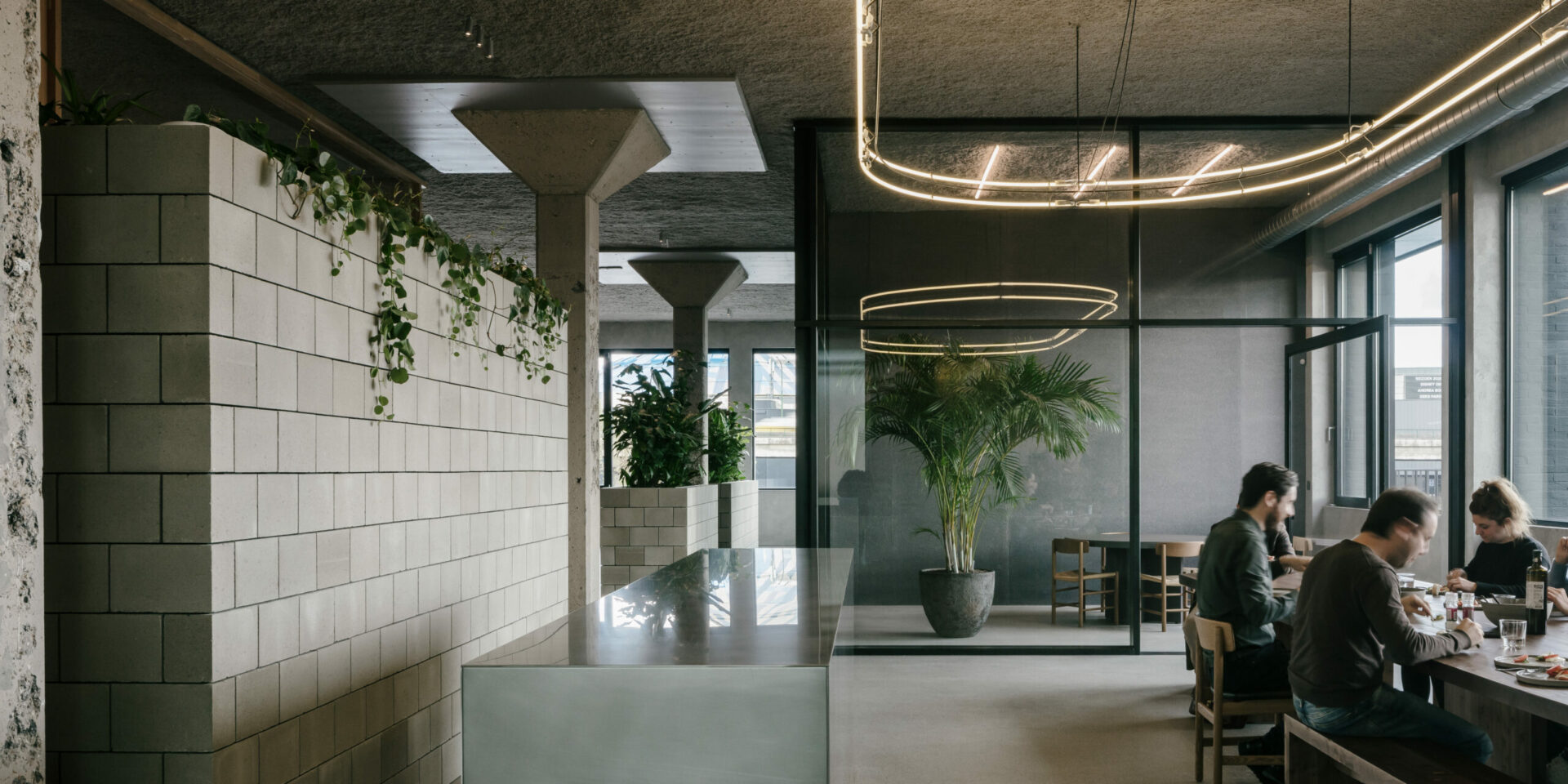 PUUR chose an industrial building as its workplace and came up with the concept “Arsenale” for the interior design.

The concept of our new office was named “Arsenale”, a reference to the exhibition site of the same name in Venice, where the Architecture and Art Biennale takes place. The experience of wandering around in a weathered, industrial building and drawing inspiration from art and architecture installations is the atmosphere we wanted to create in our office.

PUUR, a Belgian interior architect office with references in all types of interiors.

A growing team of PUUR interior architects necessitated bigger office premises. From a sustainability point of view, the choice fell on an existing building: an industrial space within an old factory building. The new office should support PUUR interior architects’ operations in the most functional way possible. A circular interior, an excellent indoor climate, good acoustics and the integration of exuberant green are some of the criteria that should be integrated in the new office in the most optimal way. 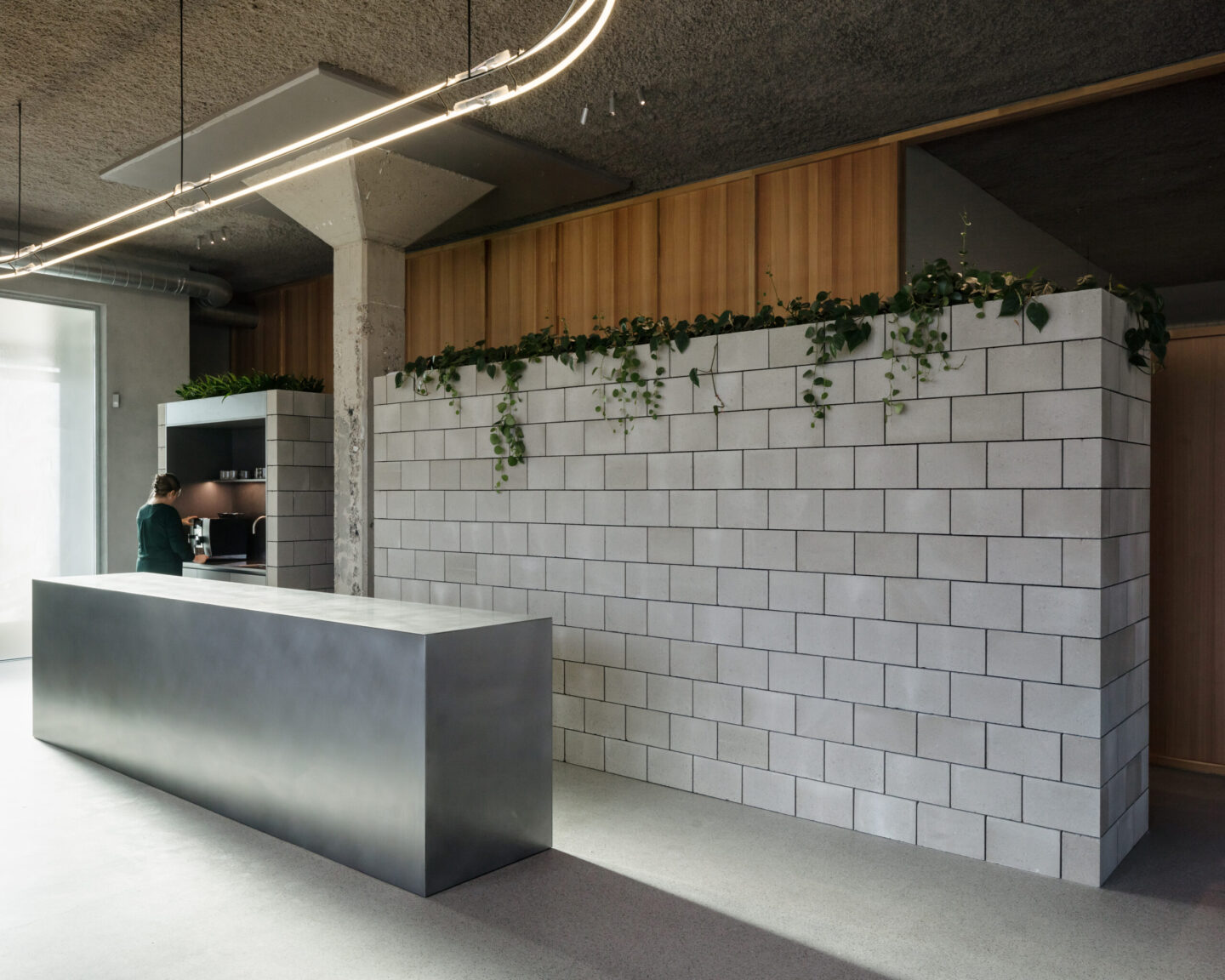 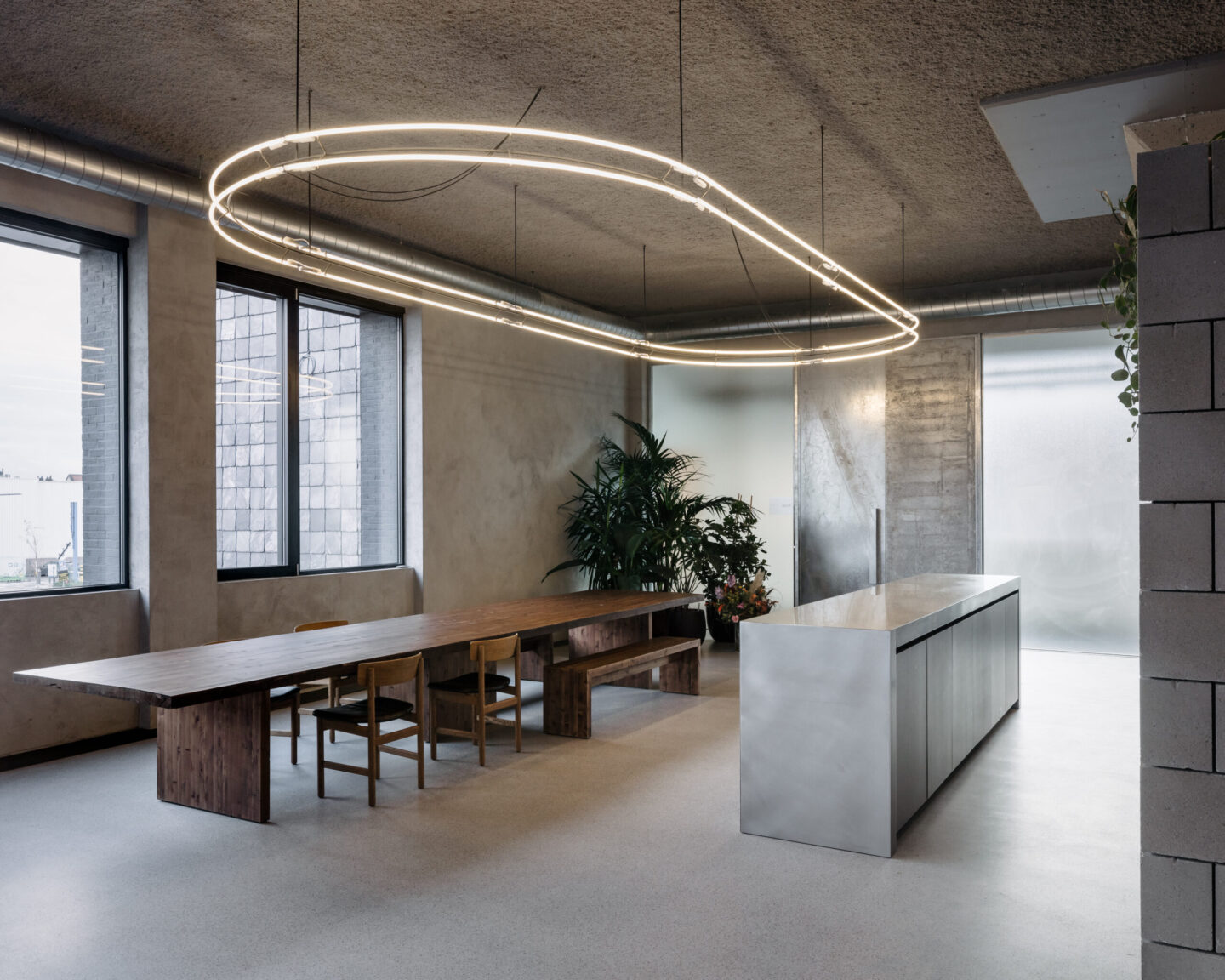 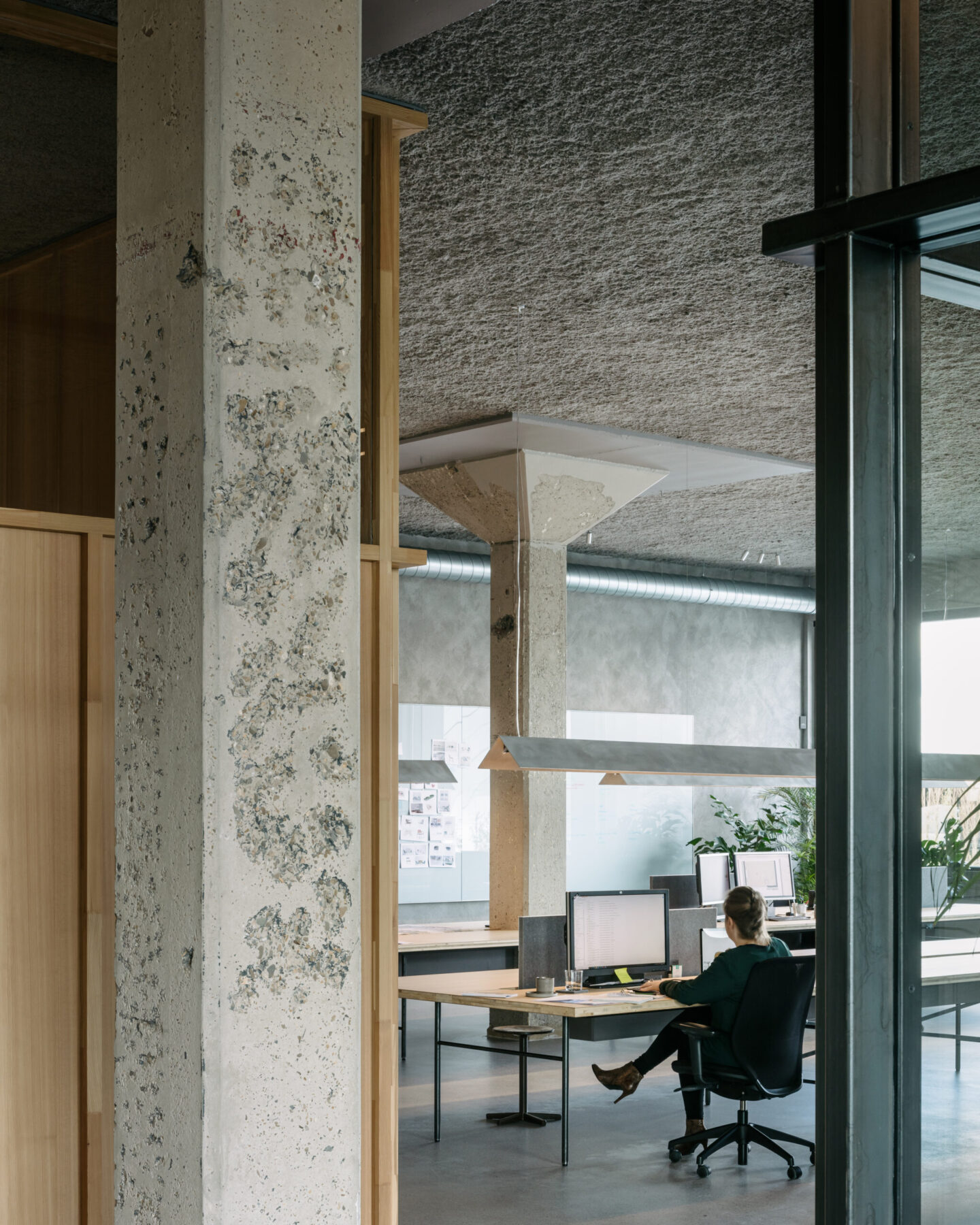 "Arsenale" as a concept for an industrial office.

According to the “Arsenale” concept, all additions are conceived as objects and installations scattered across the space, culminating in a variety of materials and shapes. Moreover, all materials are applied in their purest form, so only the natural shades of the materials are permitted.

INDUSTRIAL BUILDING . The industrial setting was the inspiration for returning the building to its original state as much as we could. This is why floors, walls and ceilings have been finished with rough materials. From a circular point of view, the same floor is used throughout. A concrete floor that has been polished so that the river gravel is visible. For the same reason, the entire ceiling is finished with an acoustic spray plaster, made from grey-painted newspaper shreds.

The walls were finished with a single layer of rough cement. Even the entrance doors have an industrial look thanks to the galvanised metal used in combination with the opaque glass.

COLUMNS . The position of the six existing columns with an inverted pyramid shape at the top proved defining for the layout. Sandblasting the columns, which were painted black, brought out all imperfections, which makes the columns authentic and adds character. Three columns form a visual link between the reception area and the open landscape office. 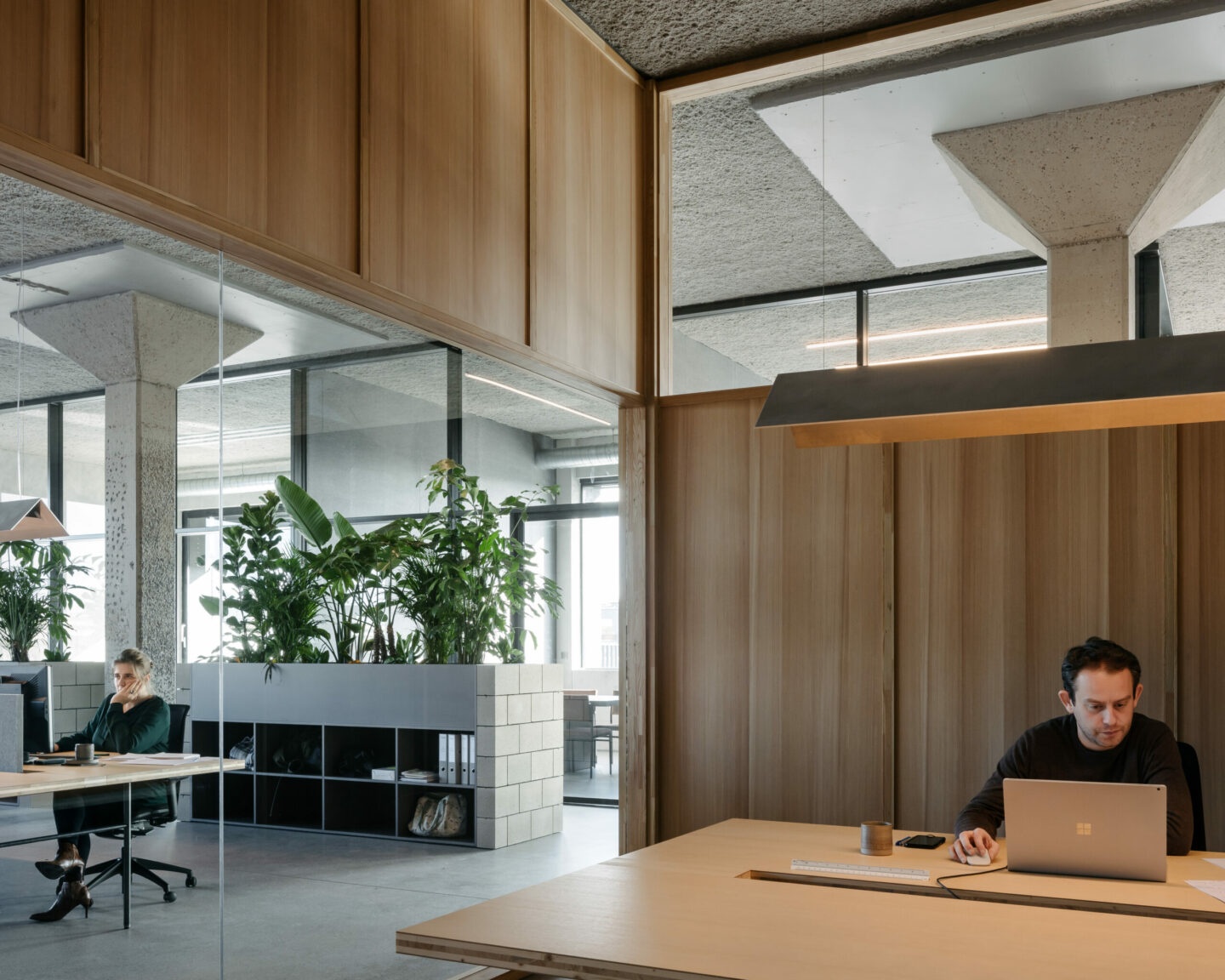 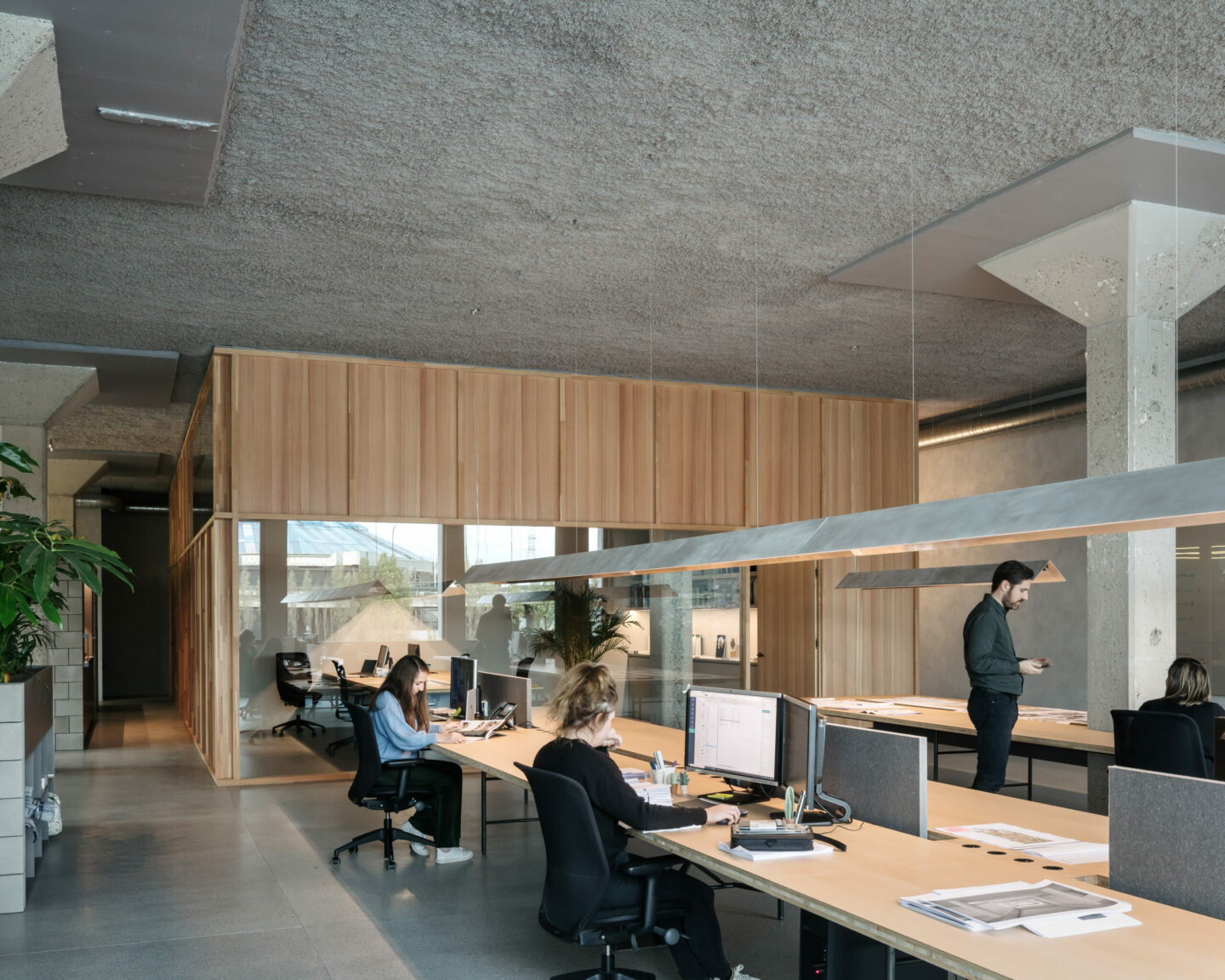 LIGHT SCULPTURES . The neon fitting in the entrance area was inspired by a slaughter line from a meat factory, with a nod to the building’s previous life. The custom-made fittings in the landscape office, which are pendants with LED lighting, are made of brushed aluminium. Since the design is minimalistic, all the attention goes to the material and shape of the fitting.

CONCRETE BLOCKS . The concrete blocks were stacked on top of each other without joints with a view to recycling these later on. The stacking of the blocks creates a graphic pattern. The blocks, a symbol of construction in itself, also refer to the architectural movement of ‘brutalism’.

EXHIBITION TABLES . The desks were conceived as exhibition tables. Made from block boards (most commonly used for making interior doors), covered with a thin veneer and with a made-to-measure blue steel frame as a leg structure. The acoustic partitions on the desks are made of Really, a circular product by Kvadrat.

GREYBOARD . The whiteboard against the wall is made of grey lacquered glass and is also magnetic thanks to the steel plate behind it.

STRUCTURE . The structure made of steel profiles is one of the new additions. The steel has an untreated look and the welds and bolts have been left visible. The steel structure has been designed so that it can be completely dismantled. Mies van der Rohe’s architecture in steel was an important source of inspiration for this frame.

This structure accommodates three meeting rooms: an informal room, a meeting room equipped for video conferencing and a large meeting room. The partition walls, made up of plasterboard, have been adjusted in width to the exact width of a standard plasterboard. This meant that waste was kept to an absolute minimum. These walls were then covered with acoustically absorbent sheets, a circular product by the Kvadrat brand, called Really.

BOX . The wooden box was designed and developed as a system of doors and fixed panels in wood and glass. The wood is a European larch species, chosen for its ecological aspect, as it is one of the most durable wood species. The box fulfils various functions: toilets, sample room, a storage and printer room, as well as a large office with a glass wall opposite the design studio. The sample room was furnished with high, standard-sized metal archive shelving. 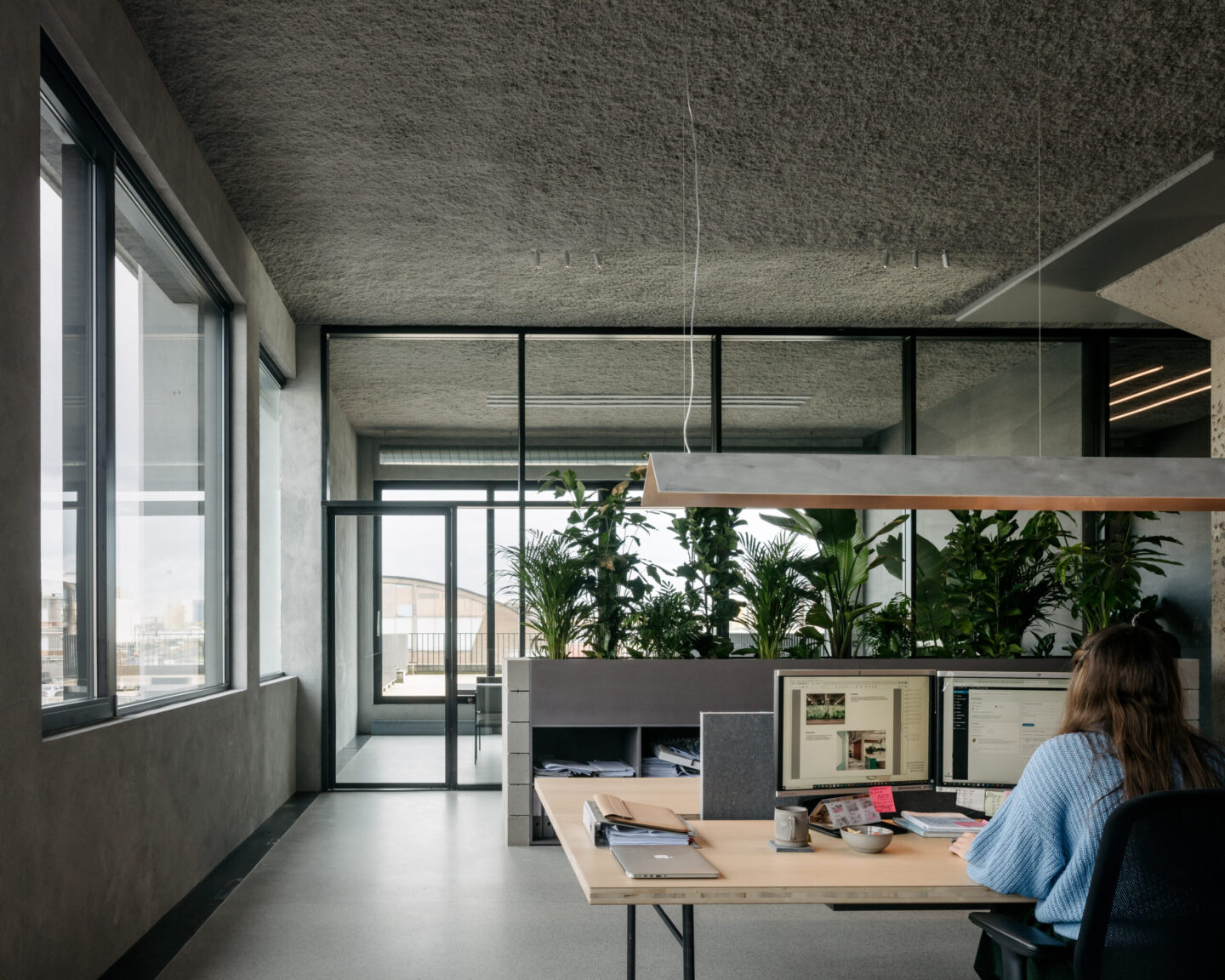 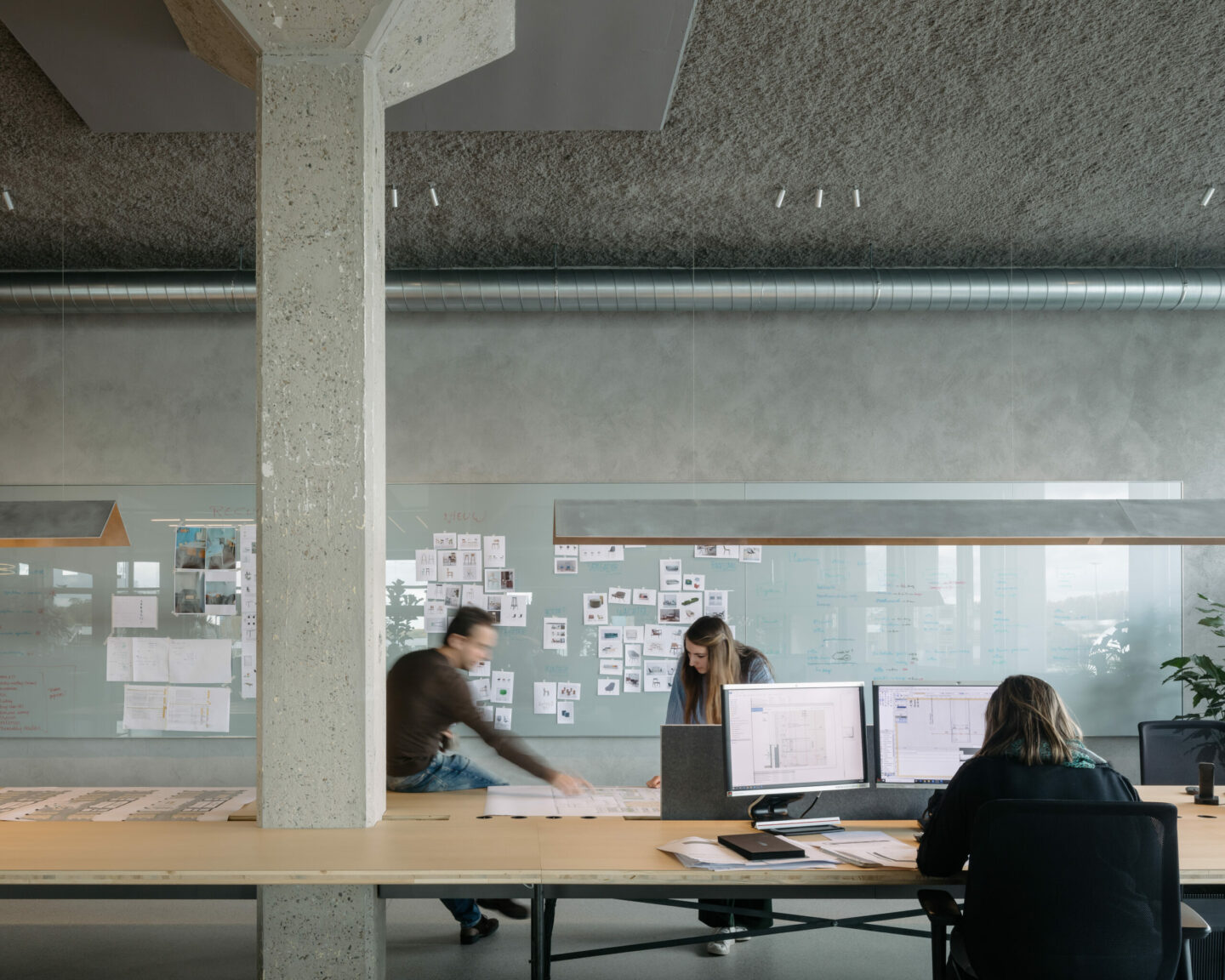 ROTOR TABLE . The large lunch table is made of wooden laminated construction beams. These beams were recovered from a roof construction of a demolished building by the architectural collective Rotor DC. By repurposing these beams as material for a table, they are given a second life.

VINTAGE FURNITURE . The chairs at the Rotor table and the chairs in the first conference room in the office are original chairs from a design by Borge Mogensen, made in the Fredericia factory. The “J39” and “Mogensen 3236” chairs had so many layers of varnish on them that it was decided to first air-gum them before treating them. It was decided to approximate the original colour of the chair as much as possible. The two other conference rooms have Pastoe chairs after a design by Cees Braakman. They were re-upholstered in colours referring to an old office past.

RECEPTION DESK . The reception area was designed like the lobby in a hotel. The counter was made of stainless steel. The niche behind the counter features a coffee machine with an Aqualex water tap next to it. 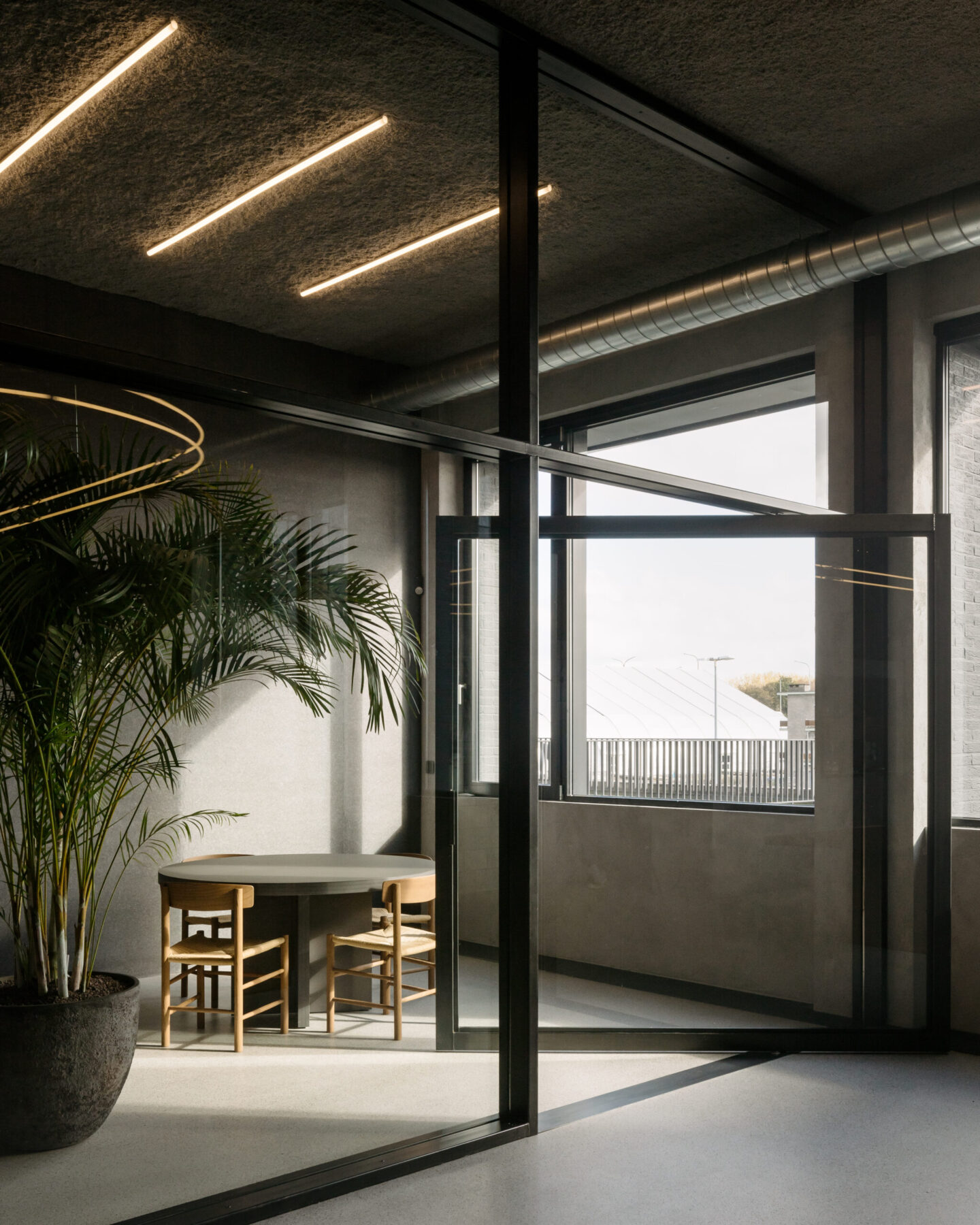 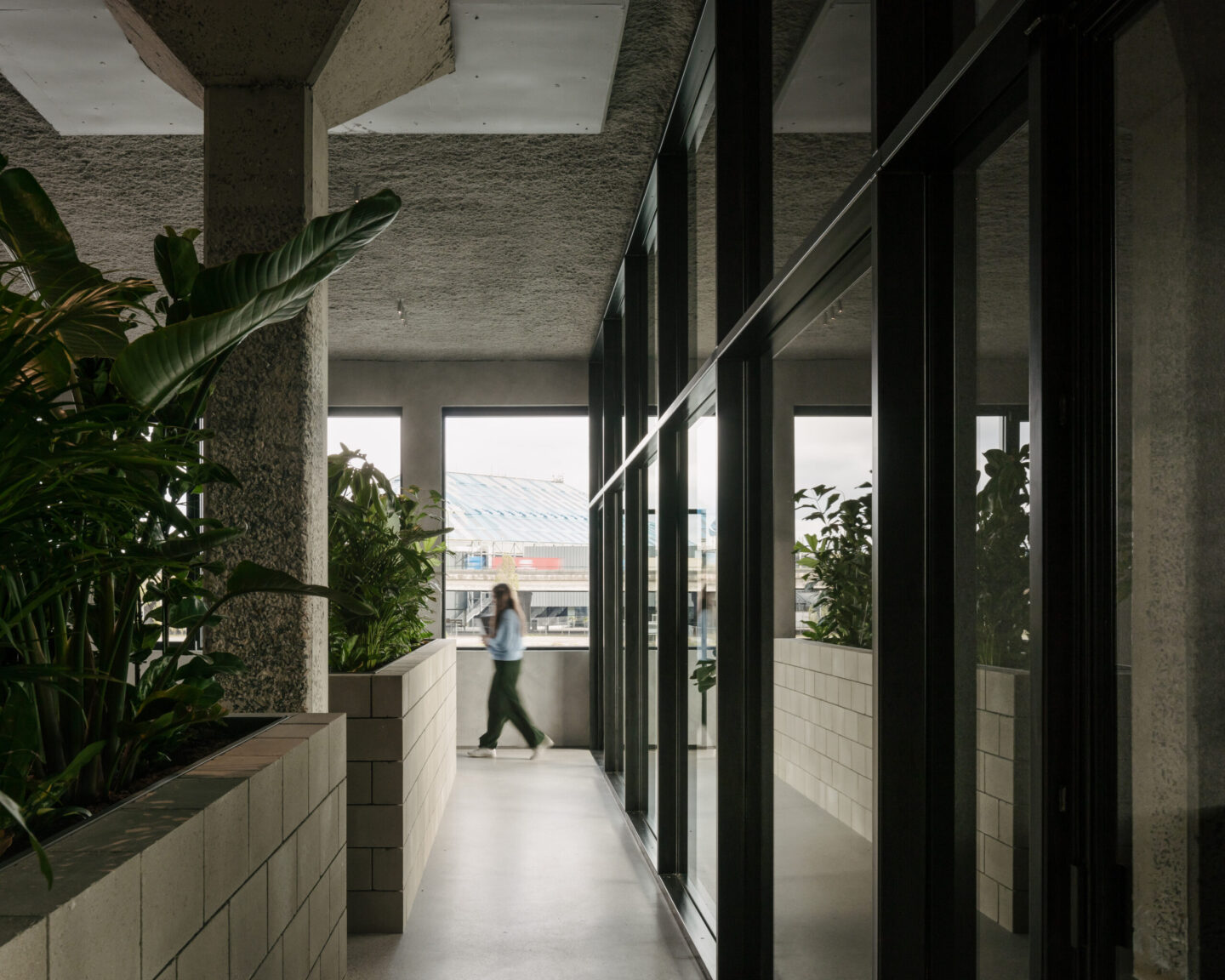 ENERGY . The energy concept of the office is based on the desire to create a good indoor climate in a climate-friendly manner. Because of the high ceilings, underfloor heating was opted for. In the summer, this can also be used to cool the floors. Both heat and cooling are generated by means of a heat pump. The outside air is brought in and filtered for fine particles by a ventilation system D. The purified air is preconditioned in winter by the hot water of the underfloor heating. In summer, the cooling water from the underfloor cooling system does the same.

Exterior blinds are necessary to keep out the heat caused by sunlight on the south side. A heat-load study has shown that the combination of underfloor cooling, cooled ventilation and external blinds means that the office does not need air conditioning.

Video: “The making of the neon pendant” 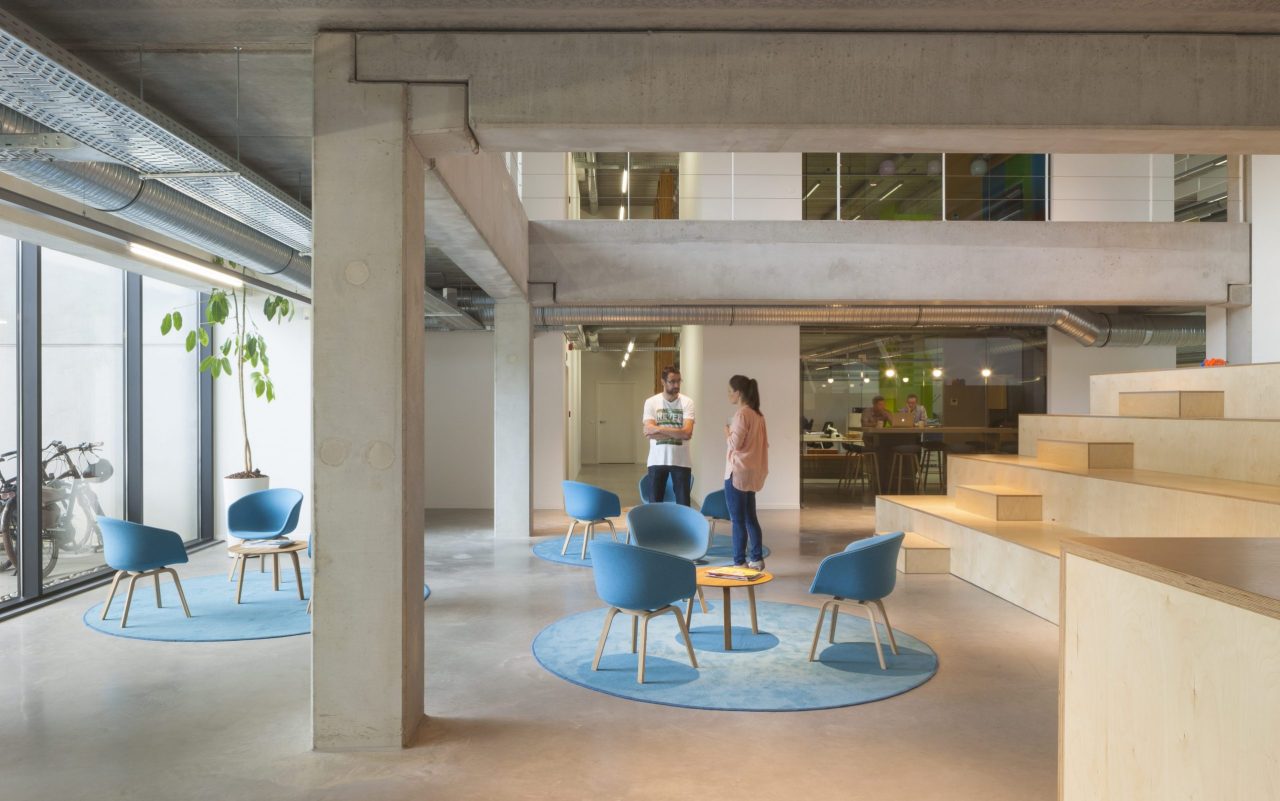 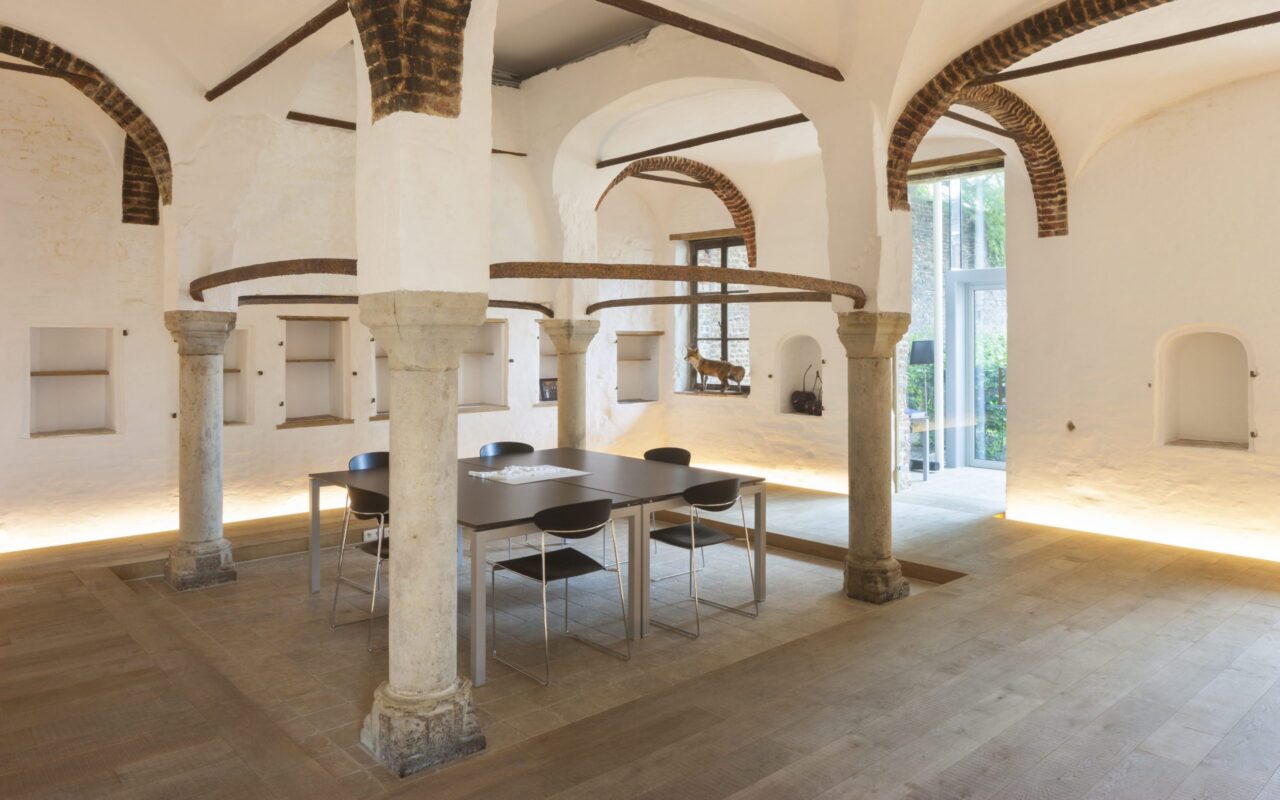 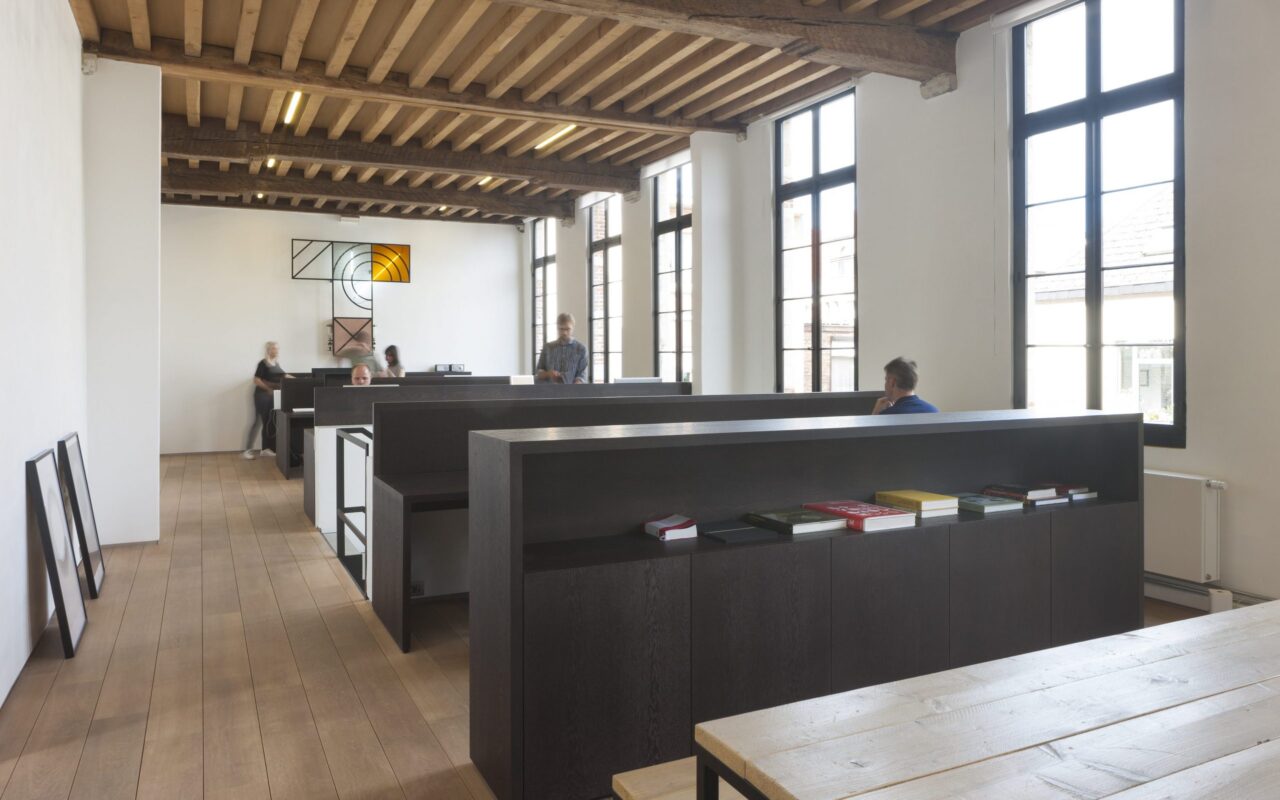 Today, Mechelen
We use cookies on our website to give you the most relevant experience by remembering your preferences and repeat visits. By clicking “Accept”, you consent to the use of ALL the cookies.
Cookie SettingsACCEPT
Manage consent

Performance cookies are used to understand and analyze the key performance indexes of the website which helps in delivering a better user experience for the visitors.

Analytical cookies are used to understand how visitors interact with the website. These cookies help provide information on metrics the number of visitors, bounce rate, traffic source, etc.

Other uncategorized cookies are those that are being analyzed and have not been classified into a category as yet.

Advertisement cookies are used to provide visitors with relevant ads and marketing campaigns. These cookies track visitors across websites and collect information to provide customized ads.