Moose in the City 2.0, Antwerp 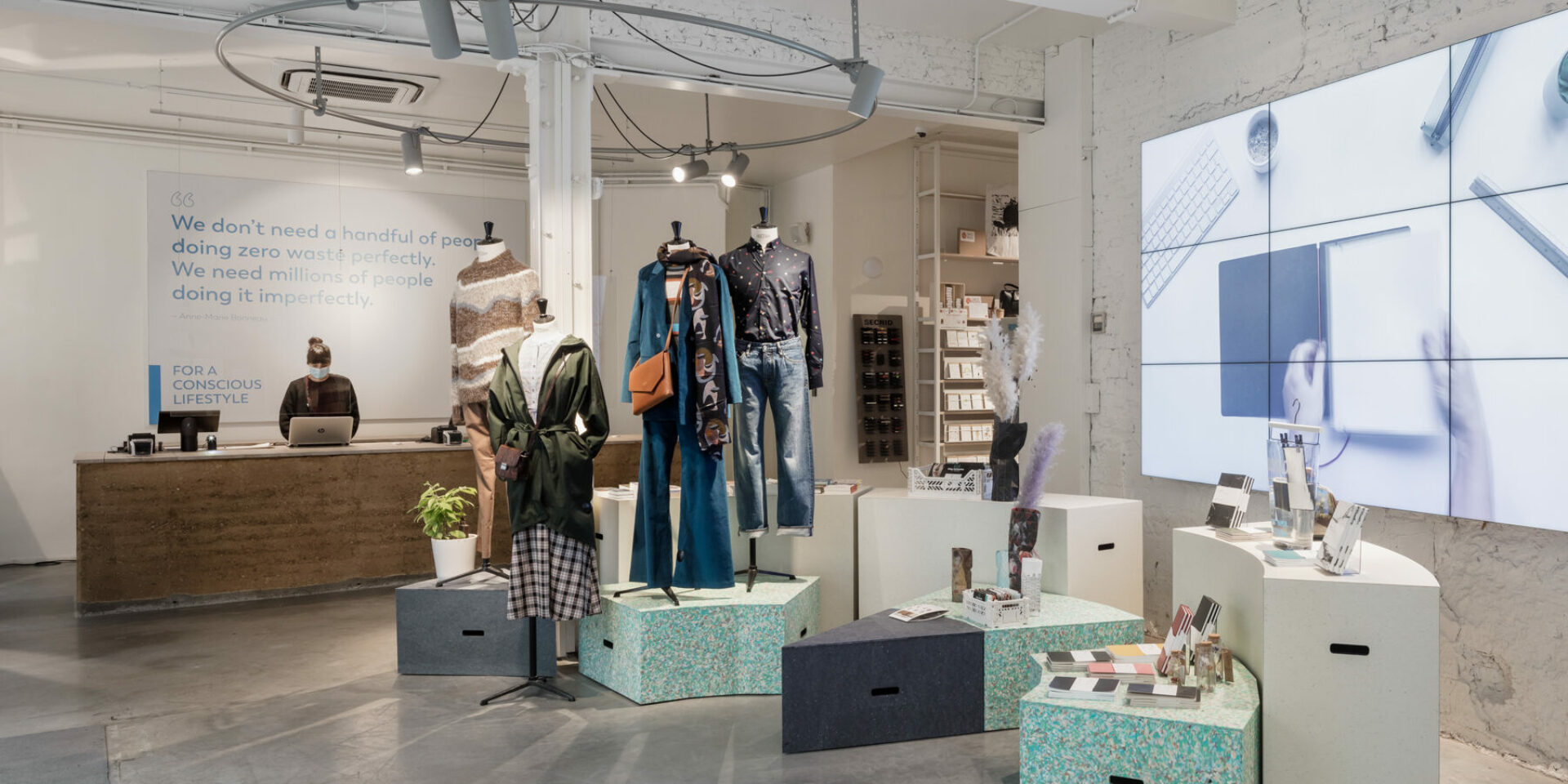 Moose in the City has hired PUUR once again to come up with a new interior concept and layout for the rebranding of the existing shop. This time with an extra challenge: the shop interior had to be as sustainable as possible. 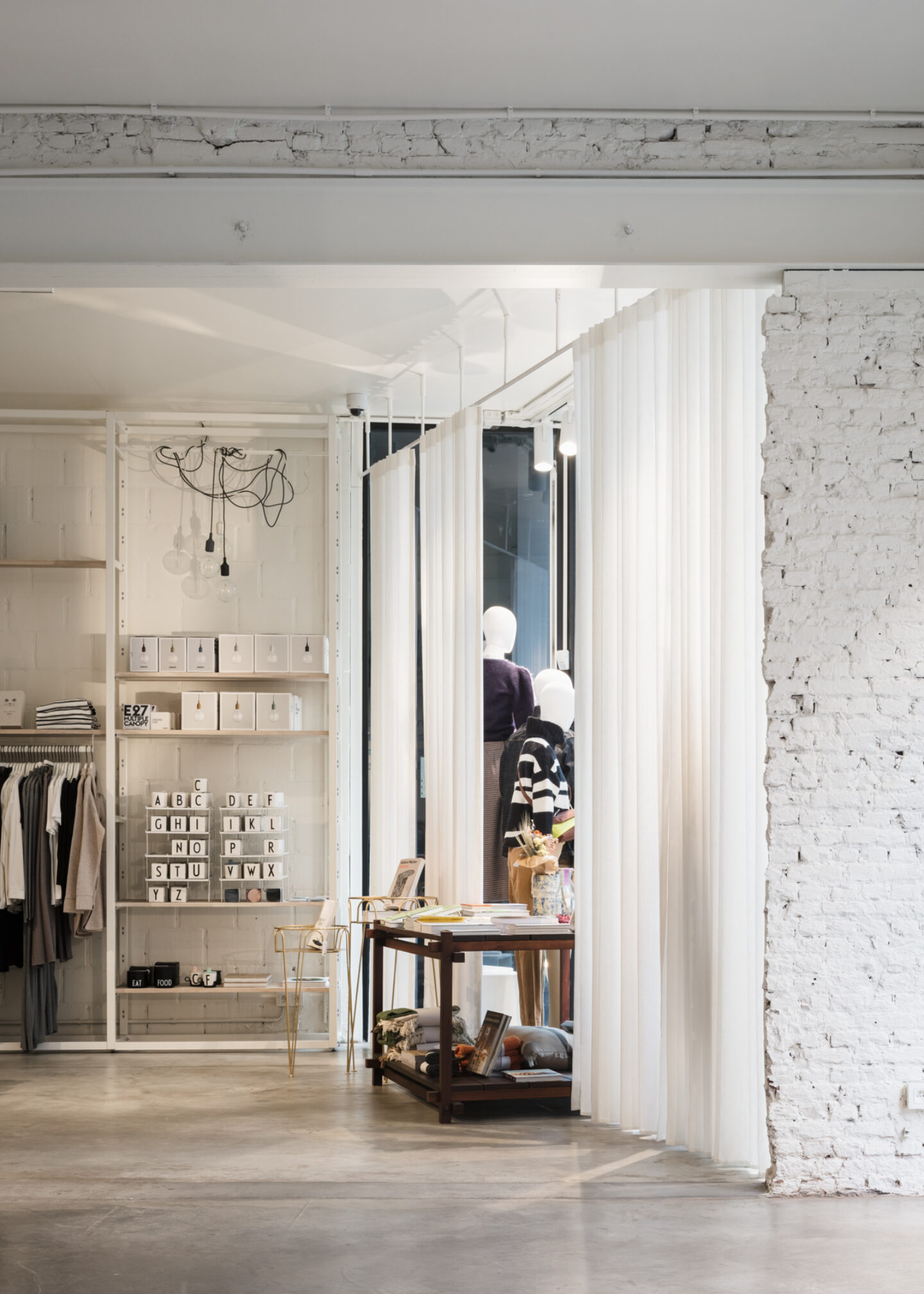 Important questions for PUUR in the redesign process: What to do with the existing store interior? What can be retained from the existing interior and what can be reused in a different way? How to deal with the choice of new materials needed for the new interior?

And what about the issue of “energy” such as heating and electricity? The answers to these various questions had a massive bearing on the new store concept. The decision to remain in the same store premises was, in itself, a sustainable choice. PUUR took stock of the elements that could be retained during the redesign.

For example, the existing concrete flooring was sanded and re-treated. The walls and ceiling were retained and painted. The lighting was recycled. Rails and white spotlights were retained. Less conspicuous items, too, such as the mirrors in the changing rooms, the large screen at the entrance, the curtains in the shop window and the folding tables, are all from the original shop fittings.

The most important element that was reused was the existing white clothes racks. These were completely dismantled and put back in a new arrangement. The original wall rack system that twists and turns, connecting the two shopping areas, in the new design has been 100% reused. The Rubberwood shelves from the existing layout were recovered one by one. They were sanded down and varnished in a new colour.

Moose in the City has been rebranded whilst undergoing a transformation from a Scandinavian concept store to a sustainable lifestyle shop. The new baseline reads: “for a conscious lifestyle”.

In 2011, the Scandinavian concept store Moose in the City opened its doors in the centre of Antwerp. Its owners commissioned PUUR to fit out the shop.  A striking shelving system was devised for the store’s concept, which filled the entire height of the space. Conceptually, it felt like one monumental, white structure, while functionally, it worked as a flexible display system that served both to store the stock goods and to present the collection.

This year, retailers Jan and Patrick came knocking at PUUR’s door once more. Moose in the City will be given a new retail concept. The new concept will focus on conscious lifestyle products. This will give consumers the opportunity to purchase clothing, books and design items more consciously. The aim is to create a more sustainable narrative with products that are manufactured in an environmentally-friendly way. The range of locally-produced goods will also be expanded.

We were asked to come up with a new interior concept and layout for the existing store unit. There were four important premises for the new layout: the two stores must feel more like a single entity, more stock space must be created, the fitting rooms must be reassessed and last but not least, the shop design must be as sustainable as possible. 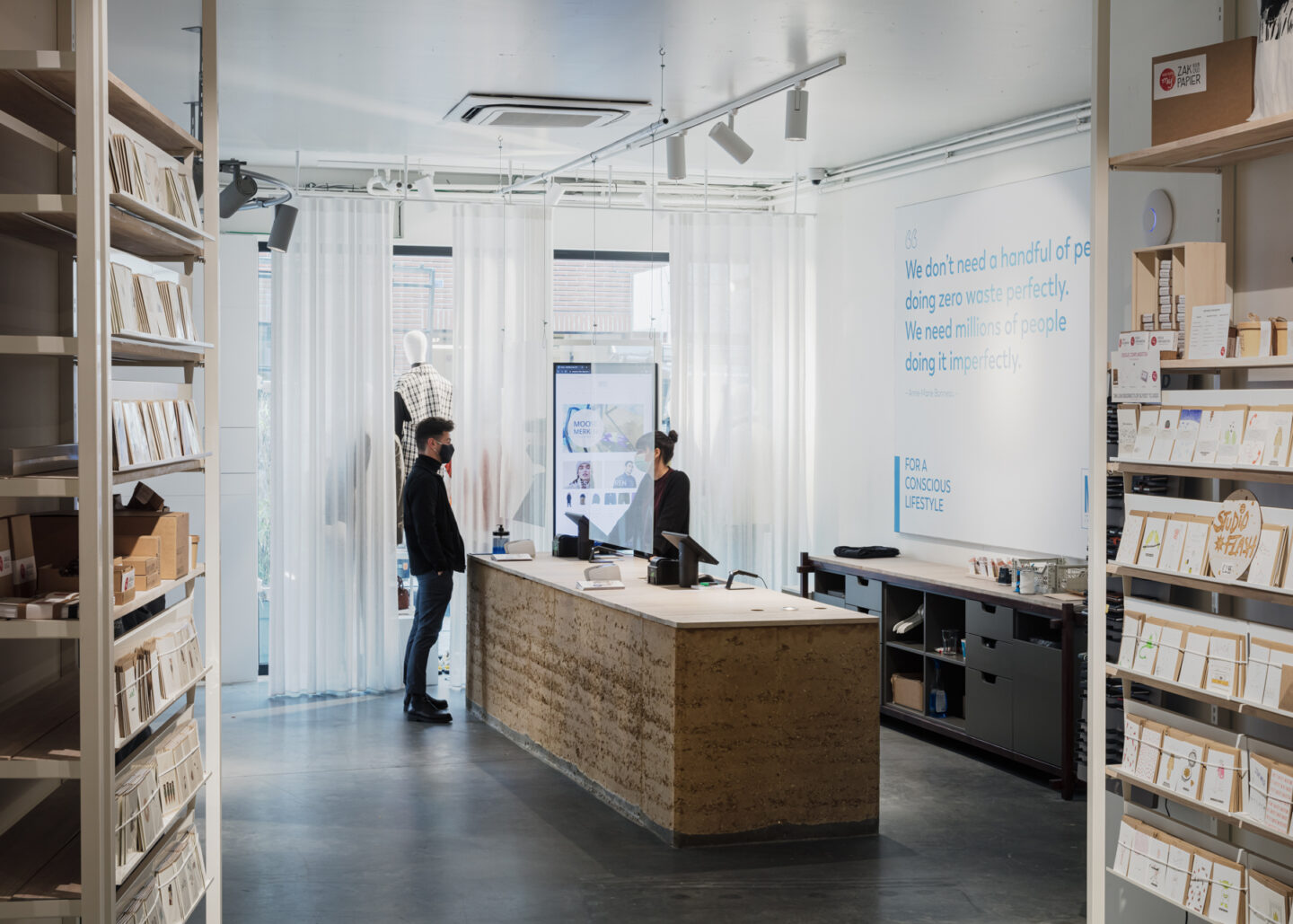 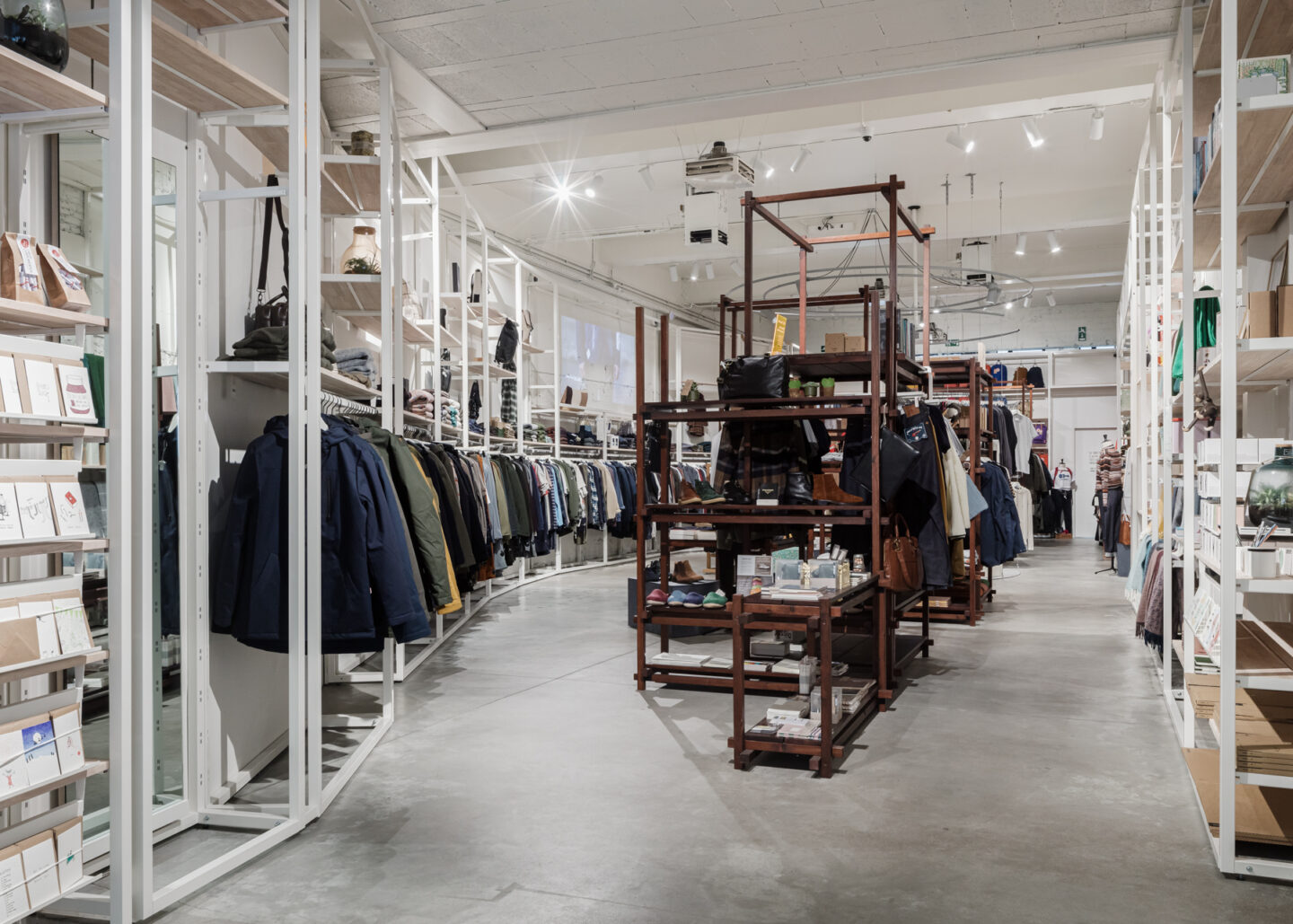 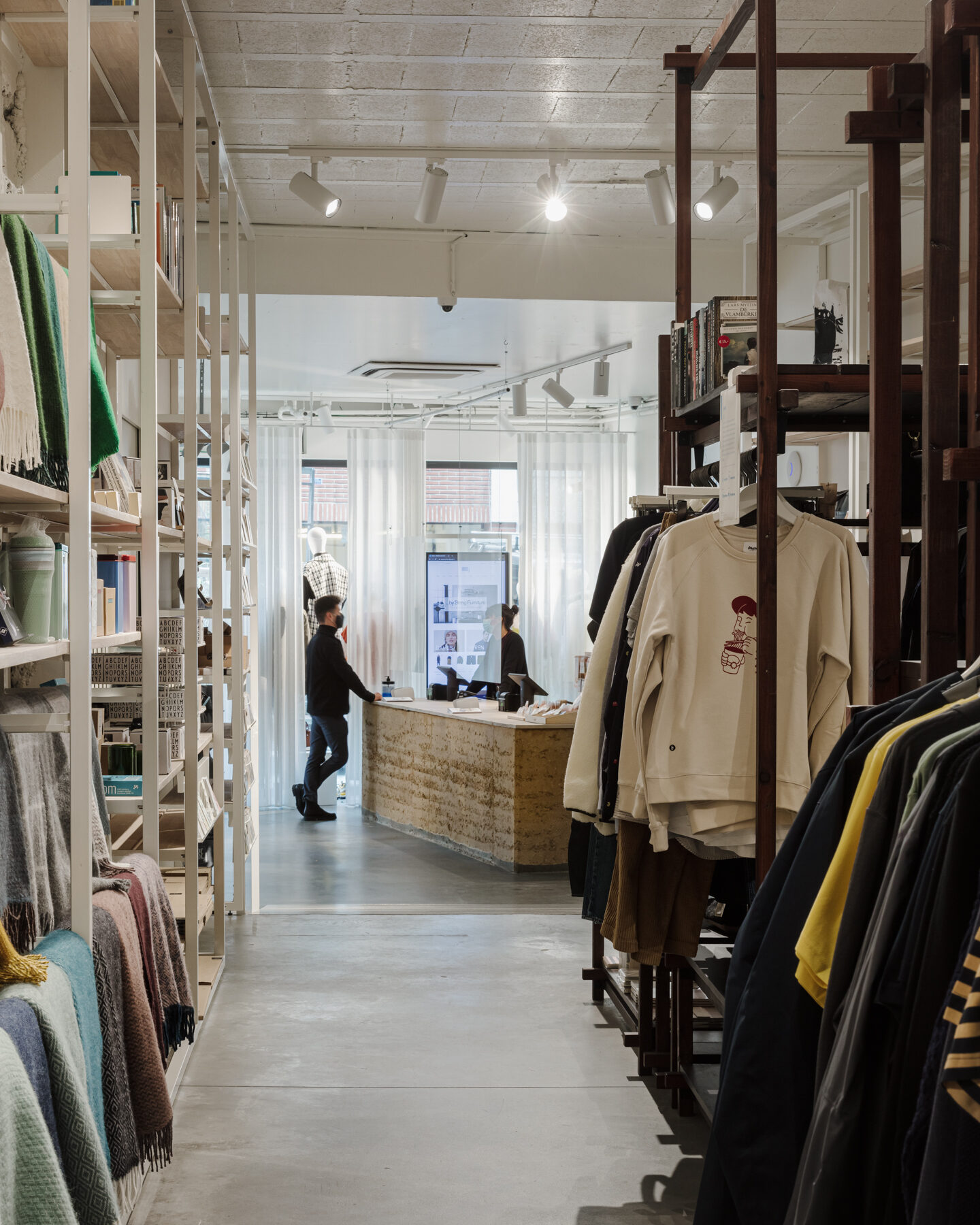 New materials were carefully selected based on their sustainable properties

We also conducted extensive studies and research to thoroughly screen the materials of all new additions for their sustainability. In doing so, we looked for materials with a low or nearly zero ecological footprint. Below is an overview of the various sustainable applications.

In terms of layout, the entrance is placed more centrally.  By creating an extra wall opening between the two buildings at the front, a natural route and a spontaneous flow are created through the store.

In the centre of the store there is a “theatre”, with a nod to the former function of the building. The most striking reference to the techniques used in a theatre is the double stainless steel ring on the ceiling in the centre of the store. Beneath these rings are rounded and wedge-shaped blocks, which can be fitted together to form one large seating element. These seating blocks double up as display elements.

The “theatre” rings and the multifunctional block elements occur as a common thread at various places in the store. To emphasise the new concept of the store, a new display system was additionally designed from wooden frames, in contrast to the existing white metal shelves. The fitting rooms were moved to the back of the store, which makes for a more comfortable and spacious fitting room area. 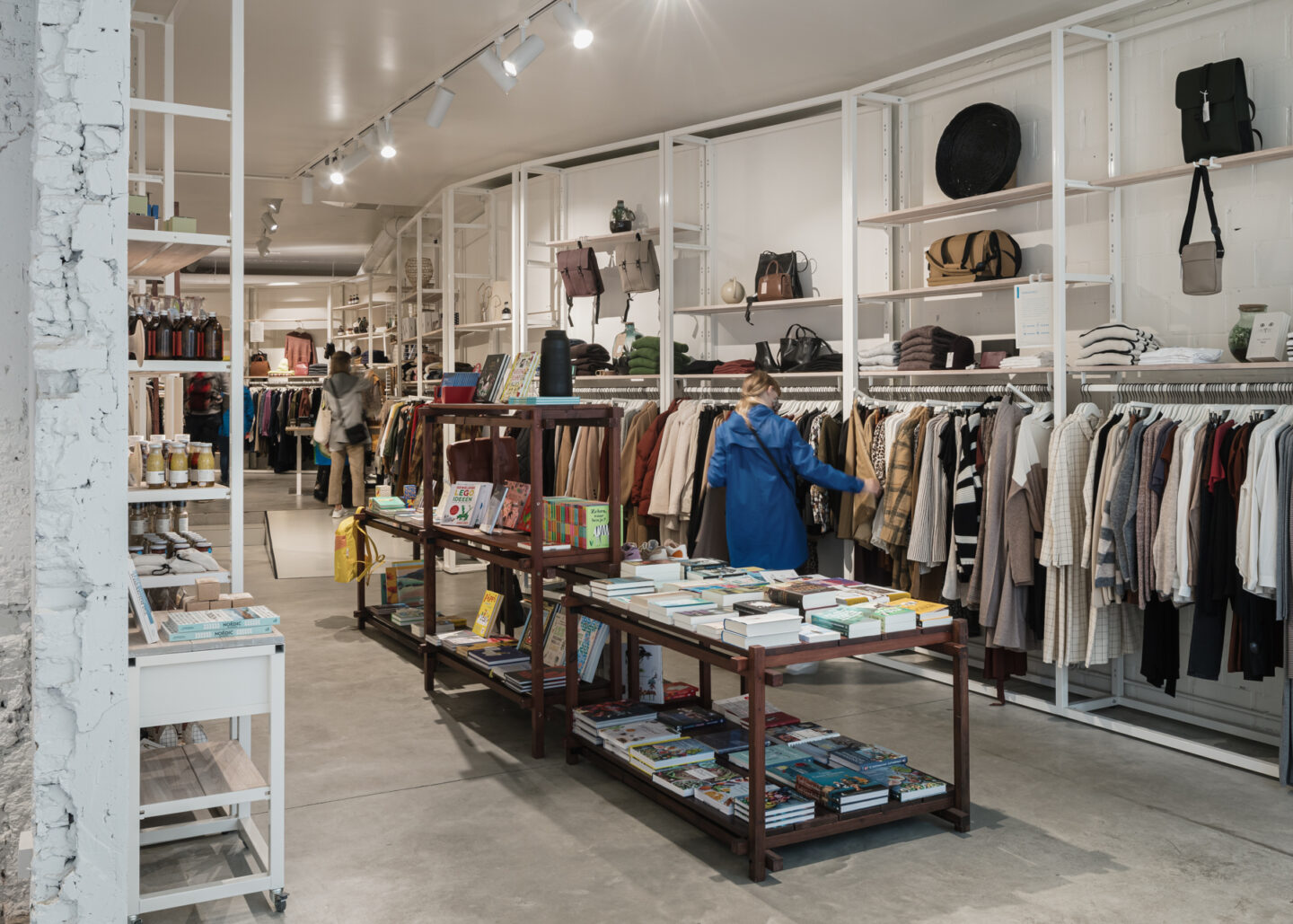 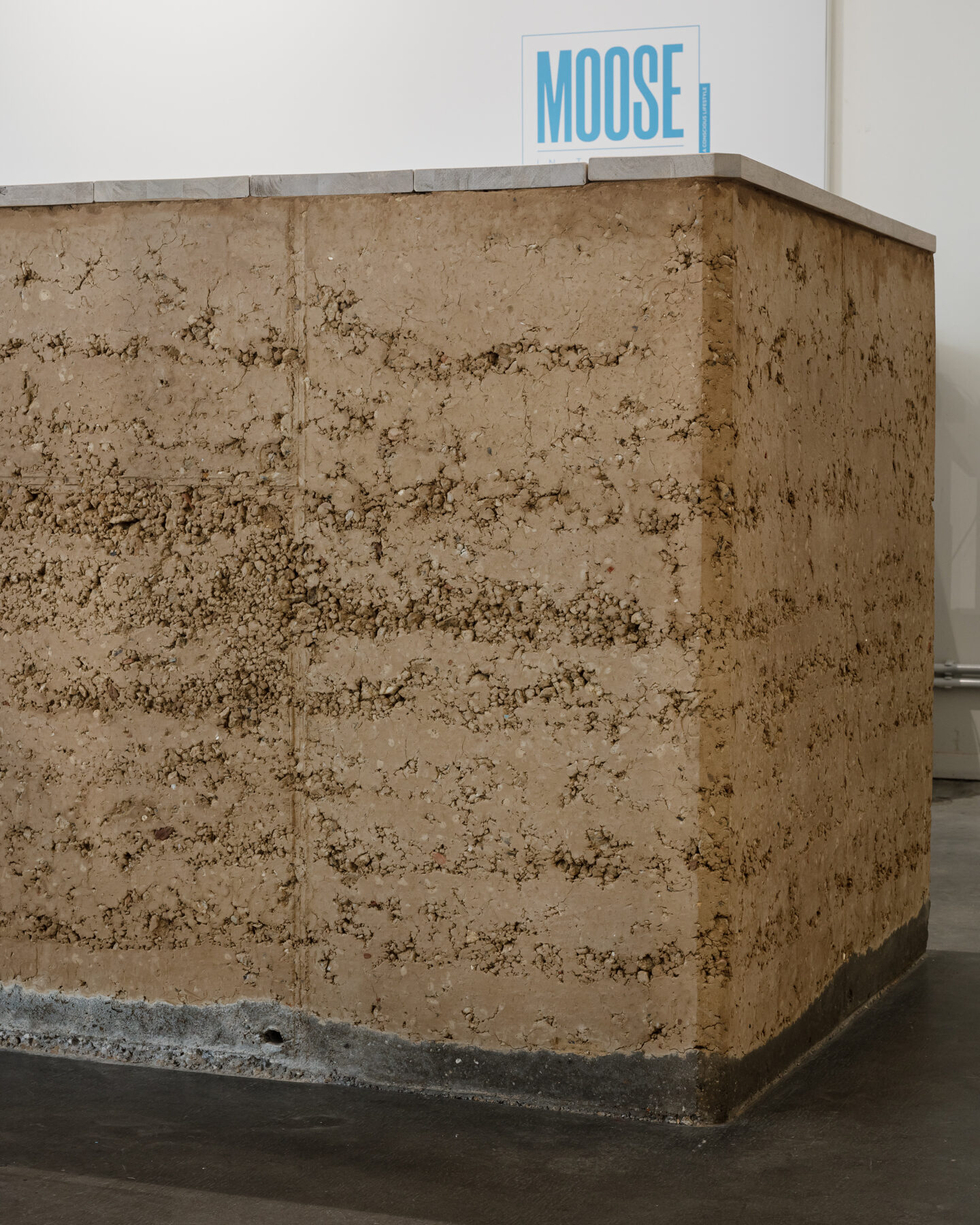 For the new check-out counter, we opted for the age-old ‘rammed-earth’ technique. In making this choice, we were guided by the Brussels collective of architects BC architects, who specialise in this technique. The material is a circular rammed-earth mixture made from non-polluted, undisturbed soil. It is poured into solid formwork to form a layer +/- 16 cm high, then compacted until this layer is +/- 9 cm high. This principle is repeated until the desired counter height is reached. It is infinitely reusable. After use it simply can be “disposed of in a field”.

Furthermore, it is CO2-neutral as no combustion is required to produce the building material. 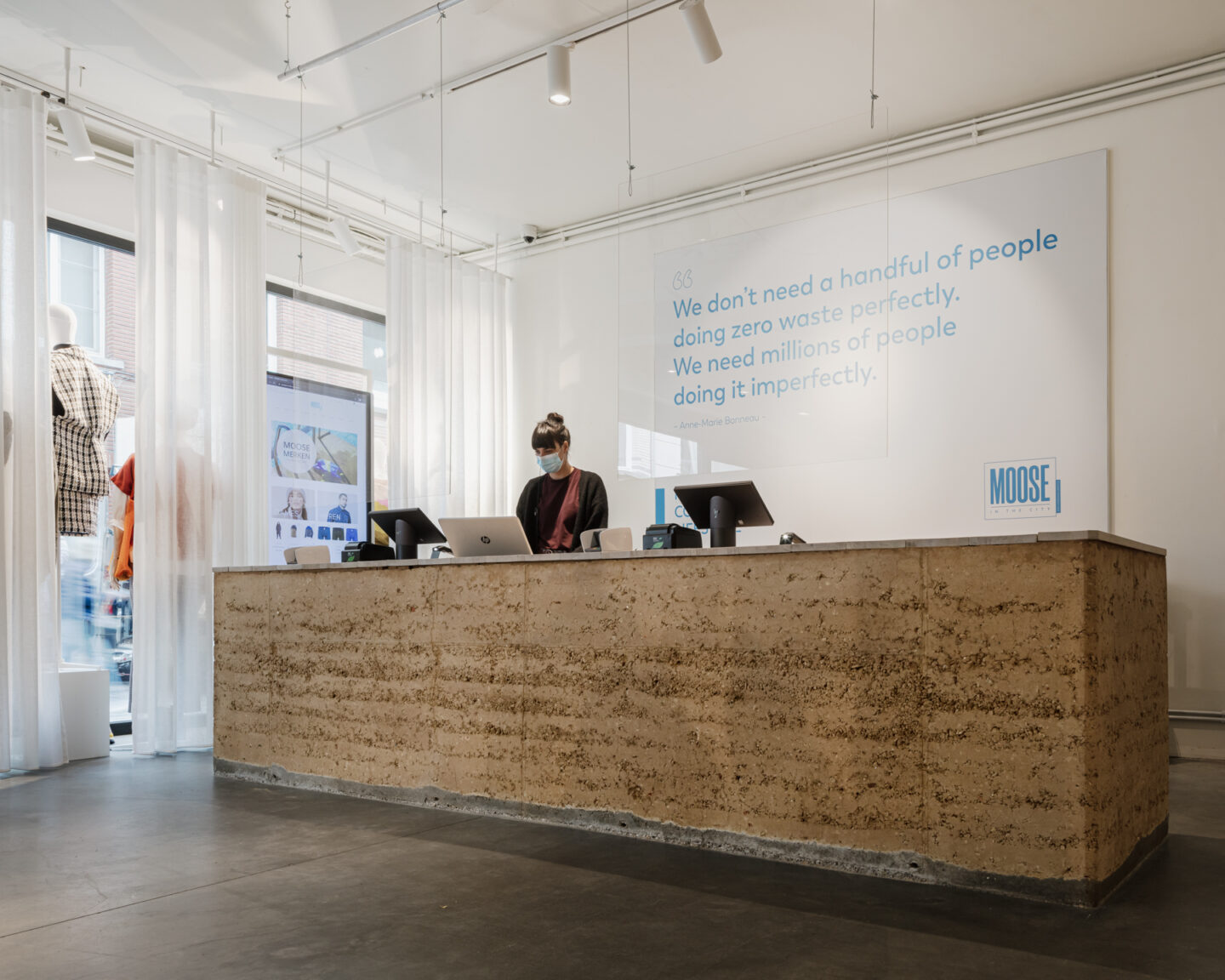 REALLY, PLASTICIET and FORBO for the multi-functional block elements that have both a display and a seating function.

Three different materials were selected for these block elements:

REALLY. The wedge-shaped blocks in blue with white speckles are made of Really. This material, similar to felt, is made from cotton and wool that have reached the end of their useful lives. The used material can eventually be re-granulated and formed into new felt sheets.

PLASTICIET. The block elements with a confetti-like look are made of a material that was invented by the young Rotterdam collective Plasticiet. This material is called “Chocolate factory” because it is made of large amounts of plastic recovered from old moulds from a chocolate factory.

FORBO. The beige speckled blocks are covered with linoleum of the Forbo brand. Marmoleum is made from natural raw materials and is, therefore, among the most environmentally-friendly flooring materials around. This new Marmoleum Cocoa is a combination of durable Marmoleum flooring mixed with cocoa shells. The tough cocoa shells are the residual product from cocoa production.  This product was awarded the Red Dot Design Award in 2017. 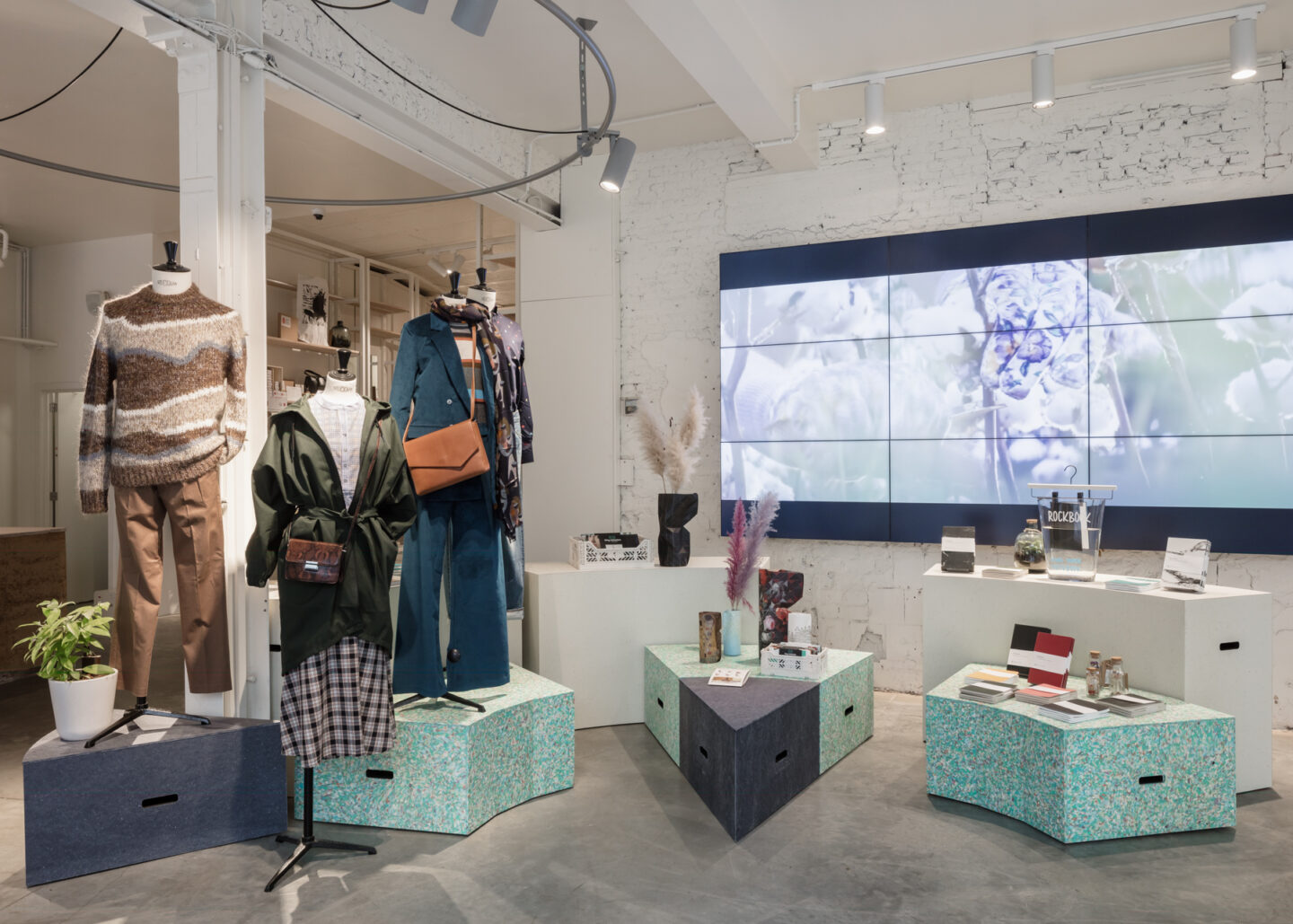 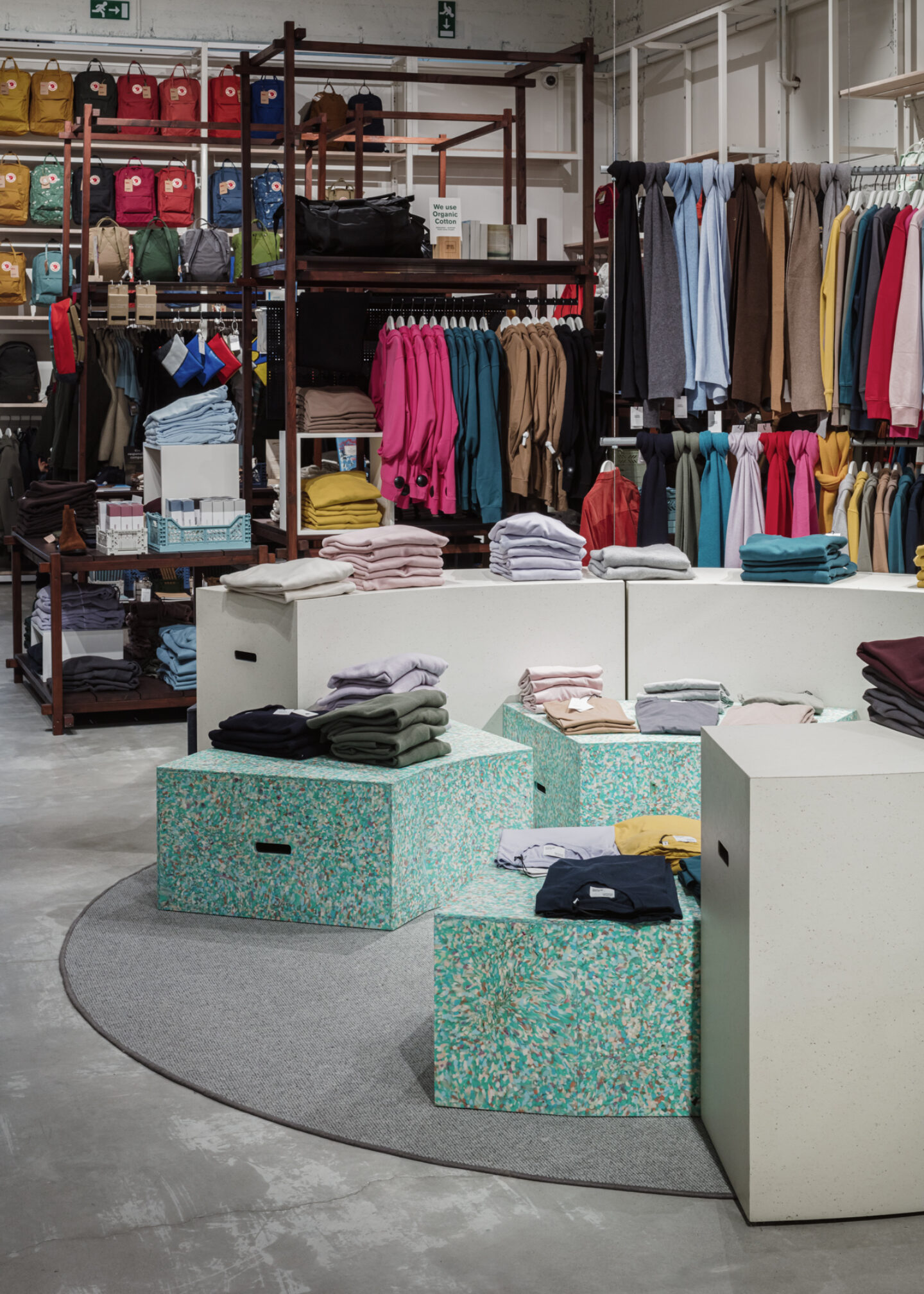 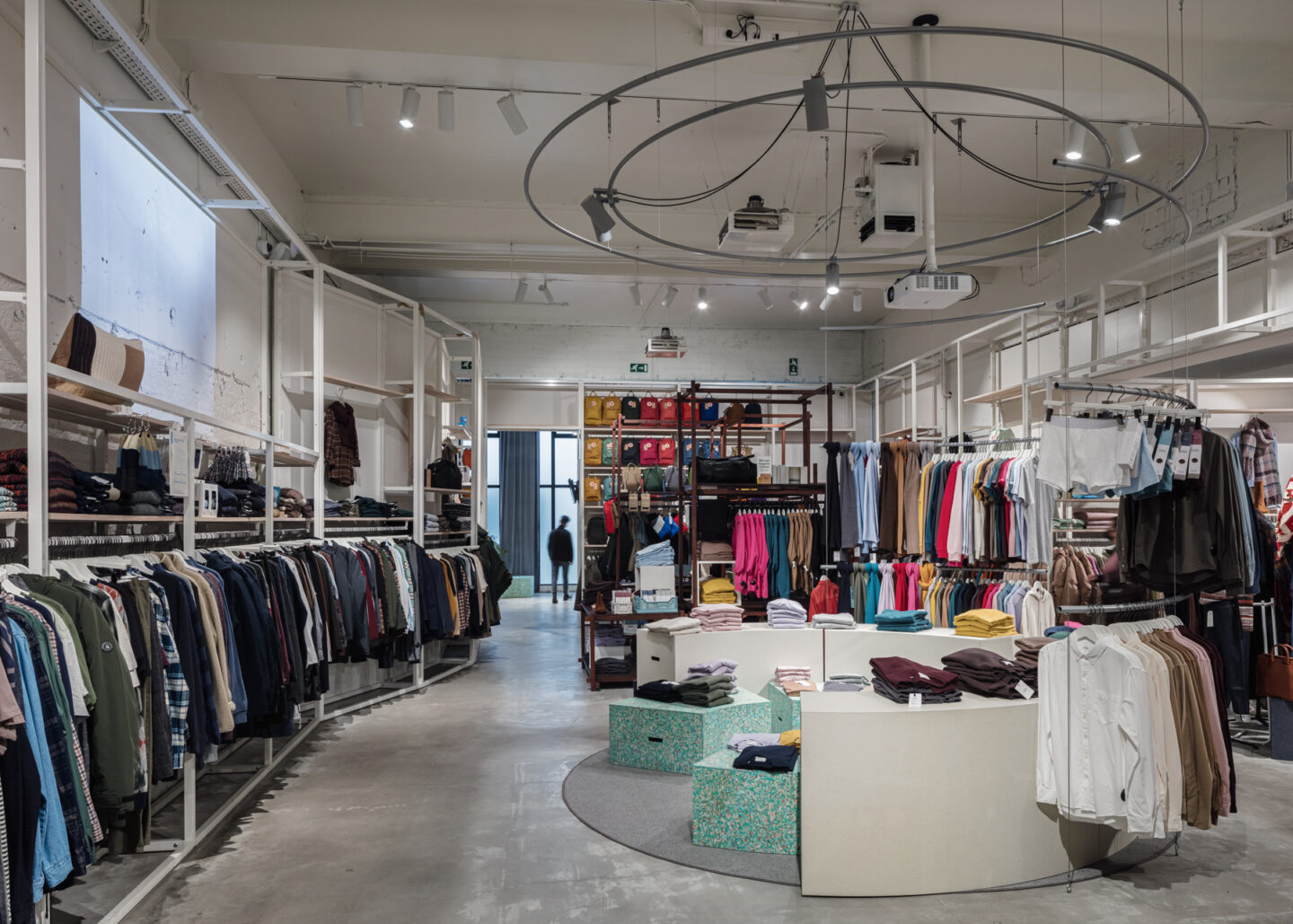 REWOOD for the cabinets of the check-out counter and the back panels of the white metal shelves. The Rewood chipboards are FSC-certified and produced from recycled wood. An important feature of this is that they are low in formaldehyde. From a partnership between Abet Laminati and Saib, Rewood has emerged as the most sustainable melamine on the market.

LARIKS for the frames of the new shelves. To clearly distinguish between the existing white, metal shelves that are being reused and the new shop shelves, we opted for wooden frames. The wood selected for this is larch. The larch wood species is the most durable and hardest European pinewood. 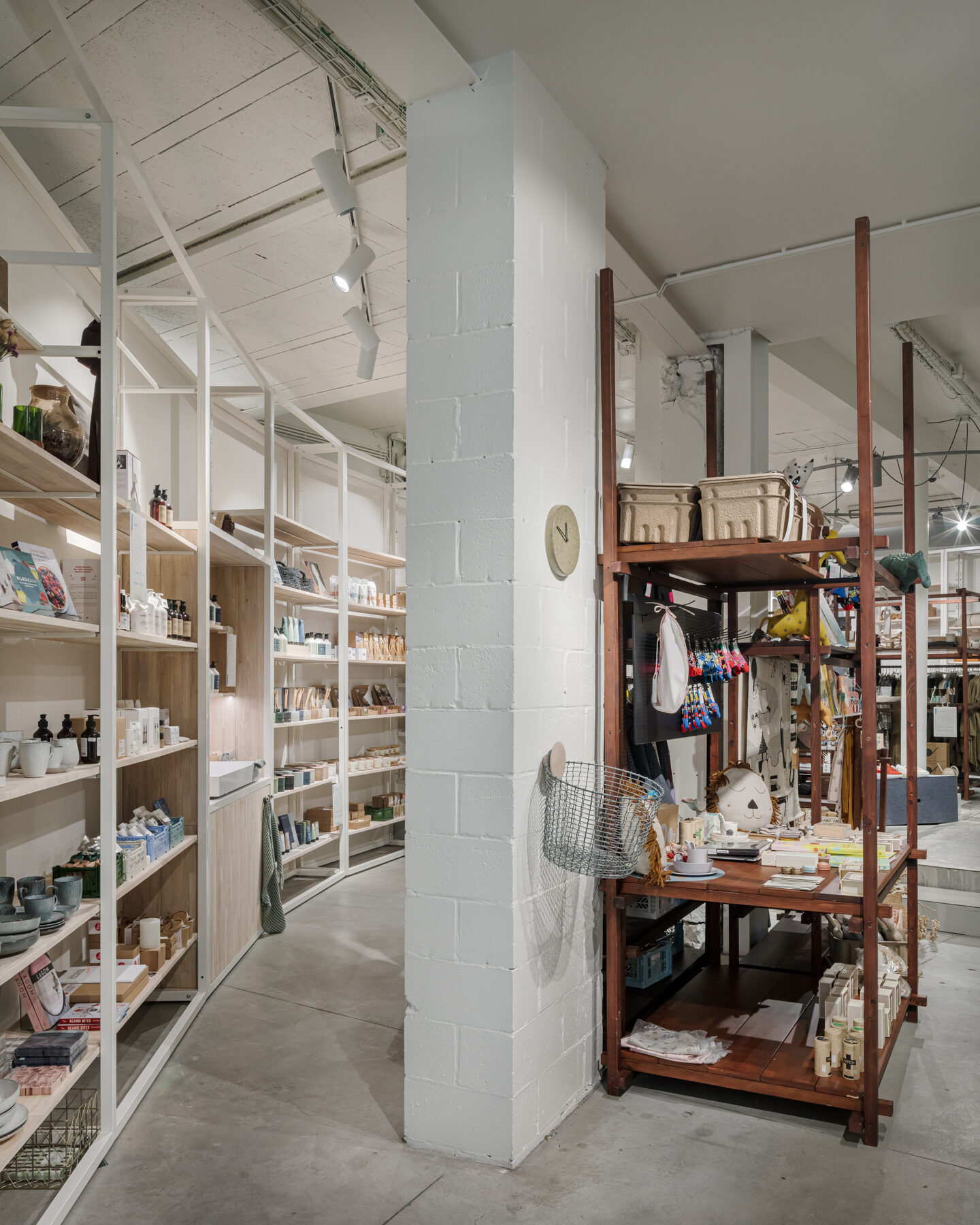 The energy consumption was examined in all areas and will be implemented in stages.

For example, the existing LED lighting was fully reused and expanded to a limited extent.

An automatic sliding door has been installed to replace the existing folding doors. The advantage of these sliding doors is that they constantly close automatically, which is an energy advantage. Consequently, the existing heat curtain at the entrance is surplus to requirements.

Part of the store is already equipped with heat pump heating, of course that part will be retained permanently. In the rest of the space, pipes are planned in this phase so that in the near future, it will be straightforward to replace the existing heating with heat pumps as well. The option of installing photovoltaic panels on the flat roof of the rear shopping area is included in the new store’s energy consumption concept.

A water point with a Quooker tap has been installed centrally in the shop, which filters tap water and offers boiling water, cooled still water and sparkling water. The integration of this tap into the store allows both visitors and shop assistants to fill up their own water bottles. 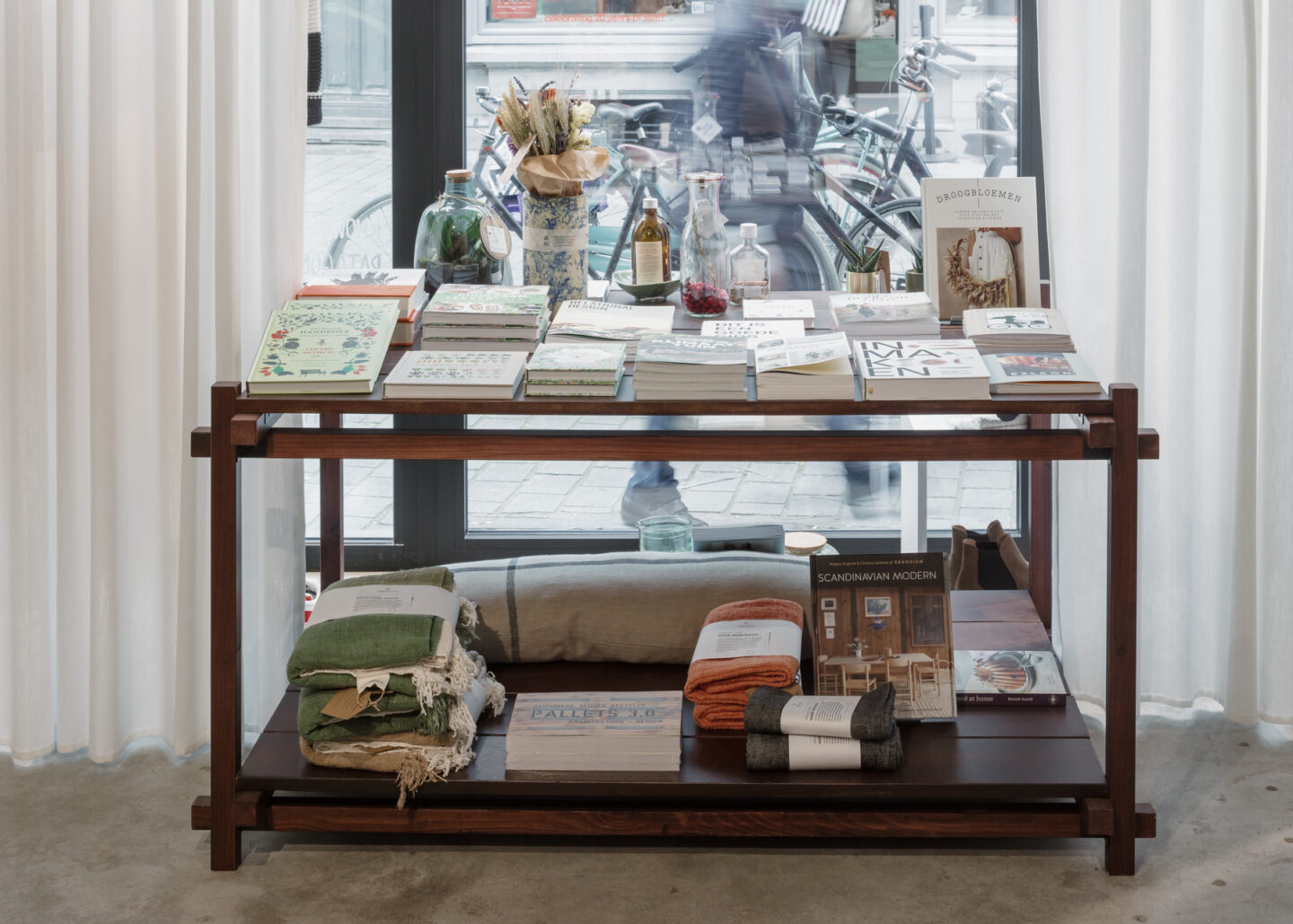 WOOL for the carpets. The material chosen for the carpets in the fitting rooms and the circular carpet on the floor in the “theatre”, is wool, a 100% natural material.

BE THE FIBRE for the curtains in the changing rooms. By grinding old jeans into raw fibres, a new circular fabric called ‘Be The Fibre’ is created, which was processed into the curtains of the fitting rooms for Moose in the City. 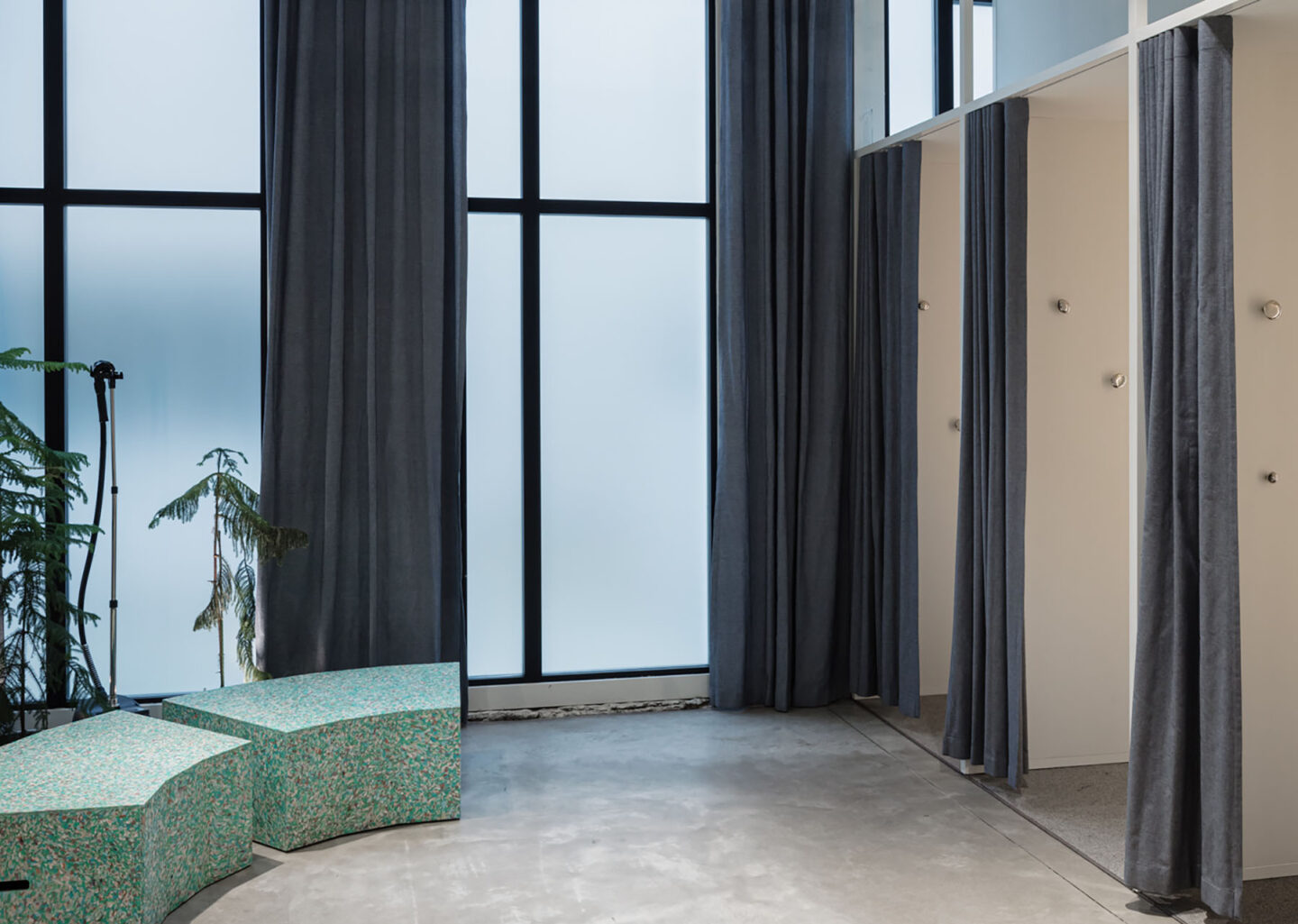 Video: “The making of the rammed earth counter” 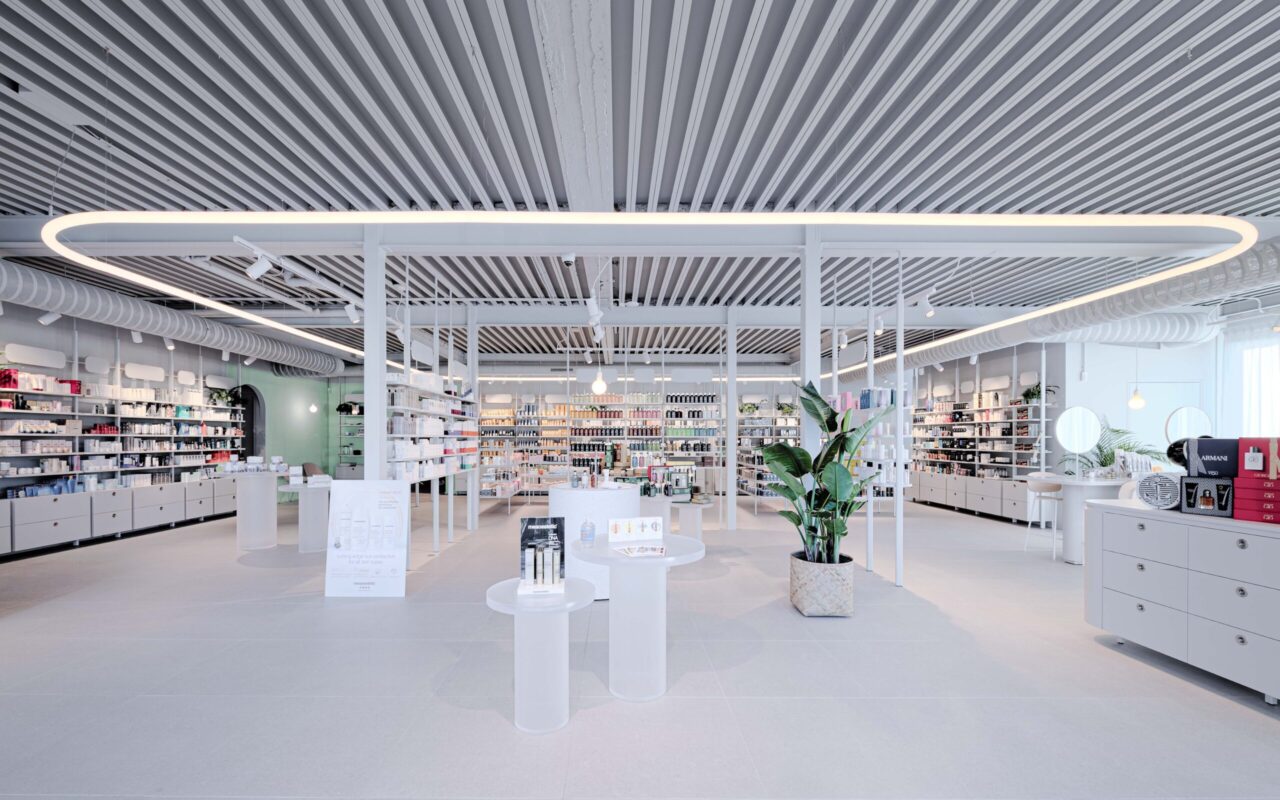 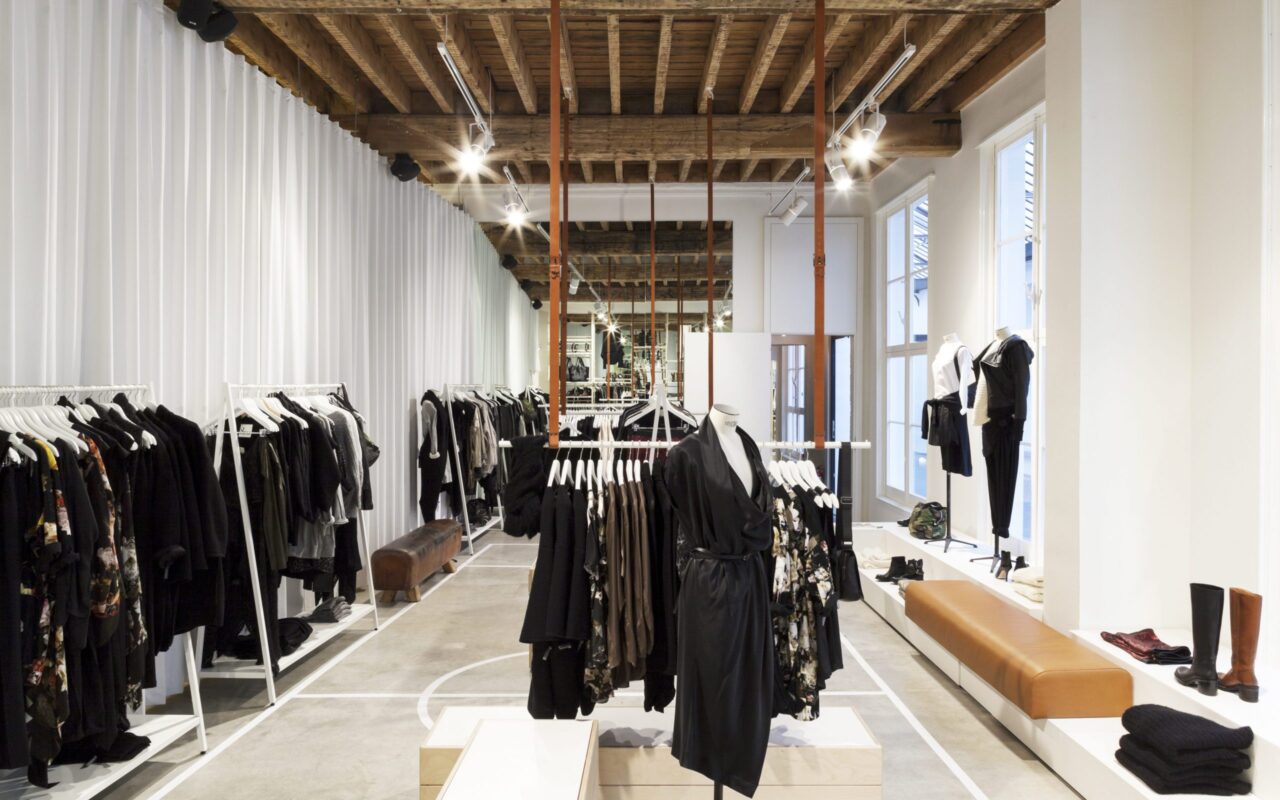 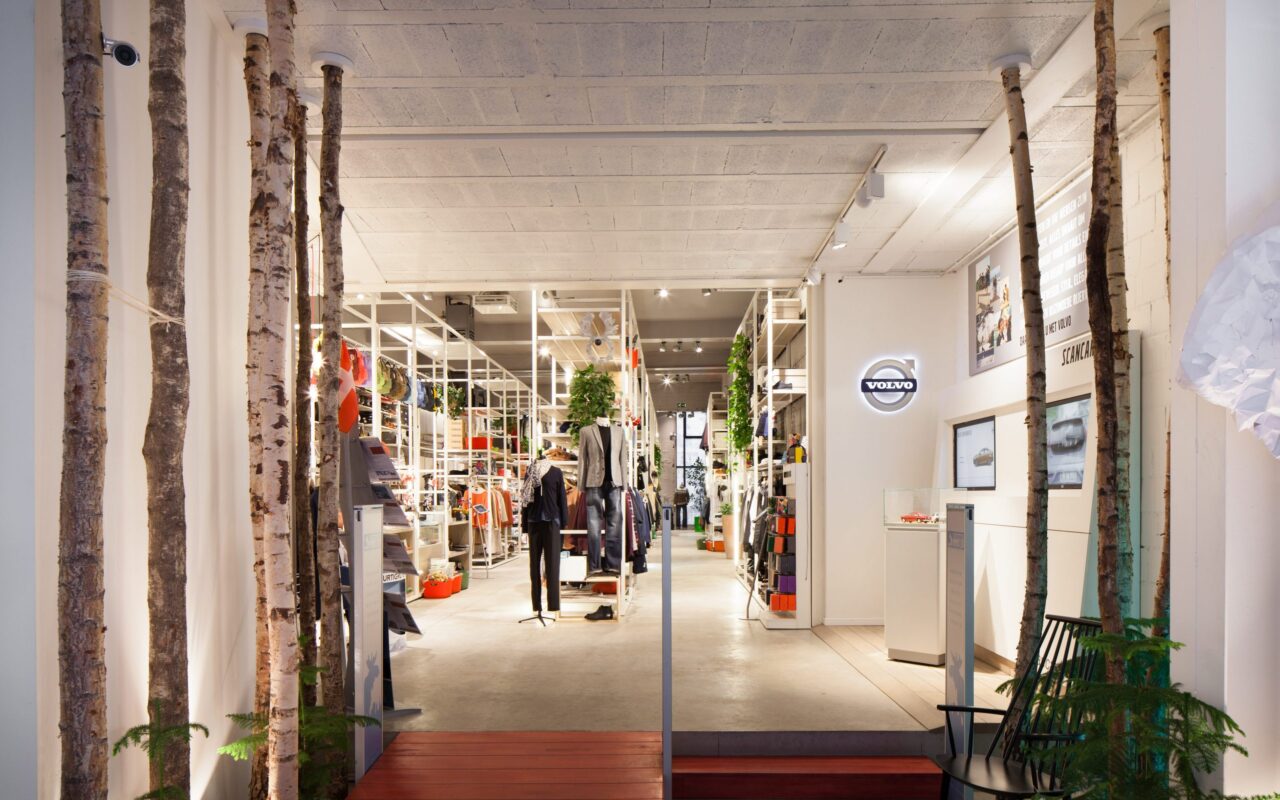 Moose in the City, Antwerp
We use cookies on our website to give you the most relevant experience by remembering your preferences and repeat visits. By clicking “Accept”, you consent to the use of ALL the cookies.
Cookie SettingsACCEPT
Manage consent

Performance cookies are used to understand and analyze the key performance indexes of the website which helps in delivering a better user experience for the visitors.

Analytical cookies are used to understand how visitors interact with the website. These cookies help provide information on metrics the number of visitors, bounce rate, traffic source, etc.

Other uncategorized cookies are those that are being analyzed and have not been classified into a category as yet.

Advertisement cookies are used to provide visitors with relevant ads and marketing campaigns. These cookies track visitors across websites and collect information to provide customized ads.